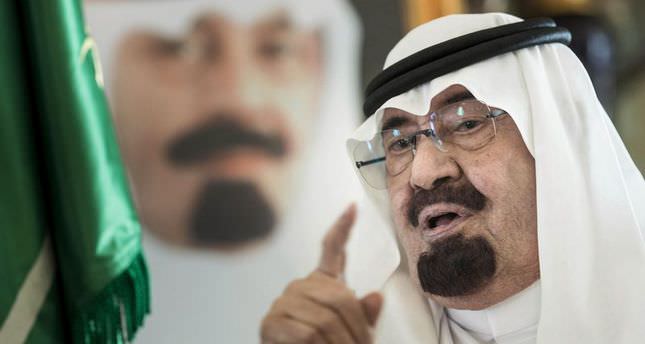 by Aug 01, 2014 12:00 am
Saudi Arabia's King Abdullah broke his silence Friday over the three-week-old conflict in Gaza, condemning what he saw as international silence over Israel's offensive and describing this as a war crime and "state-sponsored terrorism."

Saudi Arabia, which regards itself as a leader of the Sunni Muslim world, has played only a background role in the diplomacy to reinstate calm in Gaza, leaving the main Arab pursuit of a cease-fire to close ally Egypt and fellow Gulf monarchy Qatar.

"We see the blood of our brothers in Palestine shed in collective massacres that did not exclude anyone, and war crimes against humanity without scruples, humanity or morality," Abdullah said in a brief speech read out on his behalf on state television.

His speech, which focused mainly on what he described as a Middle East-wide threat from militancy, followed criticism by some Saudis on social media, including prominent clerics, over Riyadh's quiet response to the Gaza crisis.

The kingdom's policy towards Gaza is complicated by its mistrust of the territory's ruling Hamas, an movement with close ideological and political links to the Muslim Brotherhood, which Riyadh regards as a terrorist organisation.

Saudi Arabia believes the Brotherhood has a region-wide agenda to seize power from established government leaders, including the kingdom's Al-Saud dynasty, and has quarrelled with Qatar over its support for the group.

Abdulkhaleq Abdullah, a political analyst in the United Arab Emirates, said the speech was a bid to rebut accusations that Saudi Arabia - along with allies Egypt and the UAE - was happy to see Hamas weakened by Israel's offensive, which was prompted in part by increasing Hamas rocket fire from Gaza into Israel.

"People want to see a stronger position from these three countries and it is not coming over very strongly," he said.

The kingdom's muted response to the crisis so far has been echoed across a region already absorbed by a series of civil wars, insurgencies and internal political strife that have erupted in the aftermath of the 2011 Arab uprisings.

Since the Israeli air and ground onslaught began, Saudi Arabia's public expressions of condemnation over the violence have been mostly limited to statements following the weekly cabinet meetings, and to pledges of humanitarian aid.

Newspaper coverage, which often follows the official line in Saudi Arabia, has often relegated the conflict to inside pages in sharp contrast to previous Israeli incursions into Gaza.

Some editorials have taken the rare step of blaming Hamas for the bloodshed, in which 1,509 Palestinians, mainly civilians, have been killed, rather than Israel. There have been 66 Israeli deaths, 63 of them soldiers.

Riyadh took a far more prominent role at past junctures of the Israeli-Palestinian conflict. It sponsored the 2002 Arab peace initiative offering the Jewish state an end to conflict with all Arab states in return for the creation of a Palestinian state and return of Palestinian refugees. Israel rejected it.

The conflict in Gaza has coincided with Saudi attempts to navigate multiple regional crises, including political chaos in Egypt, two separate insurgencies in its neighbour Yemen and wars in Iraq and Syria.

This regional turmoil is set against Saudi Arabia's bitter rivalry with Shiite power Iran and its fears of rising influence exerted by militant groups the Islamic State and Al-Qaeda in the Arabian Peninsula, which seek to topple the Al-Saud dynasty.

In his speech, Abdullah condemned militants who he said were killing innocent people and mutilating their bodies in contravention of Islamic teachings.

He also called on the region's leaders and religious scholars to prevent Islam from being hijacked by militants.

He further said he was disappointed by the lack of any follow-up from other countries to his proposal two years ago to establish an international center to combat terrorism.

Israel declared a Gaza cease-fire over Friday only hours after it was announced, saying Hamas violated the pact 90 minutes after it took effect and apparently captured an Israeli officer while killing two other soldiers.

The truce was the most ambitious attempt yet to end the fighting and followed increasing international alarm over the soaring Palestinian civilian death toll.