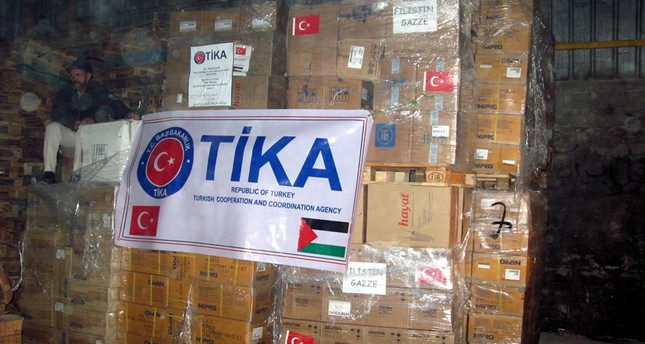 by AA Aug 01, 2014 12:00 am
The Turkish Cooperation and Coordination Agency (TİKA) on Thursday said that a fresh aid consignment has been delivered to displaced Palestinians in the bombed Gaza Strip.

He added the shipment aims at reaching 20,000 displaced Palestinian families, amid a devastating Israeli operation on the Gaza Strip which has killed over 1434 and displaced tens of thousands of others.

Israel has been pounding the Gaza Strip for nearly four weeks with fierce aerial, naval and ground assaults with the ostensible aim of halting rocket fire from the strip.

According to official Israeli figures, 56 Israeli soldiers and three civilians have been killed since the hostilities began.

Israel's military offensive, dubbed operation "Protective Edge," is the self-proclaimed Jewish state's third major offensive against the densely-populate Gaza Strip – which is home to some 1.8 million Palestinians – within the last six years.