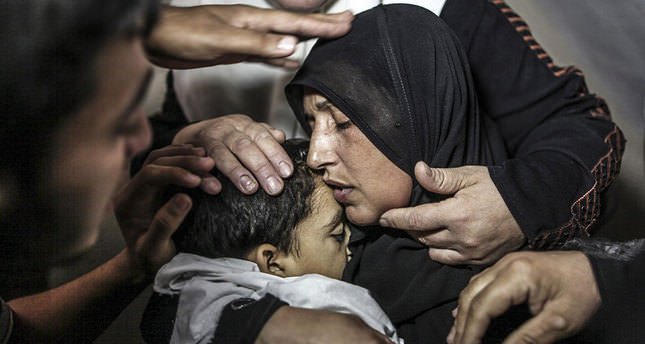 by AA Aug 02, 2014 12:00 am
GAZA CITY—At least 112 Palestinians were killed and 330 others injured on Saturday by Israeli aerial strikes and artillery shelling in different parts of the Gaza Strip, the Palestinian Health Ministry said.

"This brings the number of Palestinians killed by Israel since the beginning of the Israeli war on the Gaza Strip on July 7 to 1712," Health Ministry spokesman Ashraf al-Qodra told Anadolu Agency.

"Around 9080 Palestinians were also injured by Israeli attacks since the beginning of the war too," al-Qodra added.

He said the fatalities included 398 children, 207 women and 74 elderly Palestinians.

He added that the injured victims also included 2744 children, 1750 women and 343 elderly people.

Al-Qodra said the aforementioned death toll does not include tens of bodies that were recovered from the eastern part of the southern Gaza Strip City of Rafah.

He said rescue teams are now pulling the bodies of some of the victims from the southern parts of the Gaza Strip, which may raise Gaza's total death toll in the next hours.