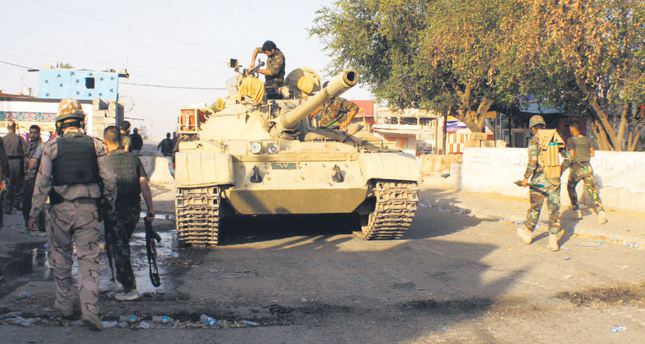 Kurds who are combatting ISIS with other armed Kurdish factions have requested military aid from the US to stop ISIS's gains, tnat are spreading to the Kurdish area

The semi-autonomous Kurdish region in northern Iraq is pressing the Obama administration for sophisticated weapons it says Kurdish fighters need to push back the militants threatening their region, Kurdish and U.S. officials said.

A Kurdish official said the request was discussed during a Kurdish delegation's visit to Washington in early July, and U.S. officials said Washington was considering ways to bolster the Kurdish defenses.

The Kurds say U.S. help is critical to enable the Peshmerga, the Kurds' paramilitary force, to repel fighters from the Islamic State of Iraq and al-Sham (ISIS), an al Qaeda spinoff that seized a wide swath of Iraqi territory in a stunning advance in the last few months.

Kurdish officials say the Peshmerga need the weapons to guard the borders of the rugged mountainous region and to protect hundreds of thousands of Iraqi refugees sheltering there after fleeing the rebels' onslaught.

U.S. officials say they are considering ways to help the Kurds defend themselves, but direct provision of arms to the Kurdistan Regional Government (KRG), in the way Washington arms Iraq's central government in Baghdad, appears highly unlikely.

U.S. weapons supplies could set a potentially troublesome precedent for circumventing an allied government to provide U.S. arms to a regional force. "The provision of security assistance via Foreign Military Sales and Foreign Military Financing must be coordinated with central government authorities, in Iraq and elsewhere," a State Department official said on condition of anonymity. "We provided some direct assistance in the past to Kurdish security forces in coordination with the central government," the official said. "Given the threat that Iraq faces by (the ISIS), the United States will continue to engage with Baghdad and Arbil (the Kurdish region's capital) to enhance cooperation on the security front and other issues."

The U.S. caution reflects Washington's delicate position as it seeks to help Iraq stave off collapse to a rag-tag, extremist army less than three years after the U.S. war there concluded.

In the weeks since the rebels assault exposed the Iraqi army's weakness and the effects of years of sectarian squabbles, U.S. officials have scrambled to bring Shi'ites, Sunnis and Kurds together to confront militants.

At the same time, the long-running Iraqi Kurdish ambition for independence has been strengthened by the Peshmerga's stronger showing against militants, by Kurdish territorial gains, and by the fact that Maliki has fallen out of favor in Washington.

The Peshmerga, whose name means 'those who face death,' gained a reputation for toughness during years of fighting former Iraqi leader Saddam Hussein and, in recent years, occasional standoffs with soldiers loyal to Maliki.

While Iraq soldiers deserted their posts en masse in northern Iraq before the ISIS offensive last month, the Peshmerga kept ISIS at bay while also seizing the oil-rich city of Kirkuk, which was previously under Iraqi army control.

That new dynamic shaped U.S.-Kurdish talks in early July, when a delegation including President Masoud Barzani's chief of staff and his foreign relations chief visited Washington.

While Iraq's Kurds have long been a reliable U.S. ally, especially since U.S. air power helped them secure self-governance after the 1991 Gulf War, Washington has never thrown its support behind the notion of an independent state. Instead, the United States has urged Kurds to share power with Shi'ite and Sunni Arabs within a federal Iraq.

During the Kurdish officials' visit to Washington, Barzani asked the region's parliament to make preparations for a referendum on independence.
The Obama administration, which sent hundreds of soldiers to Iraq last month to protect diplomats and to analyze Iraq's military capabilities, has said it is considering what military actions it might take against the ISIS.

As part of its response, U.S. soldiers set up a joint operations center in Arbil, in part to assess the Peshmerga.

Kurdish officials say their weapons request, which they also discussed with members of Congress, was not unprecedented.

They pointed to Taiwan, which buys weapons from the United States but which China regards as a renegade province. The United States at times provides military assistance through non-military channels.

While formal military sales to Kurdistan may be deemed impossible, U.S. officials say they are searching for other ways to empower the Kurds militarily - in conjunction with Baghdad.

But if the United States seeks to supply Kurds weaponry through Baghdad, it will have to overcome deep Kurdish suspicion of the central government. Baghdad and the KRG are embroiled in a dispute over control of oil sales from Iraqi Kurdistan.

The Kurdish official, speaking on condition of anonymity, said that Kurds were told they would receive some of the equipment the U.S. military left behind when it withdrew in 2011 but Maliki never provided it. The Iraqi military did not respond to requests for comment.

Since 2003, the United States has spent over $25 billion to train and outfit Iraq's national army. Very little U.S. training and equipment, most of which has been nonlethal assistance, went to the Peshmerga.

Over the years the Peshmerga have acquired Russian-made weaponry, including some tanks, and a few rescue helicopters. They also captured some weapons last month when they commandeered facilities abandoned by Iraqi soldiers in Kirkuk.

But Kurdish officials say much of what they have is outdated and will be no match for the sophisticated weaponry captured by ISIS fighters when they swept through northern Iraq.

Retired U.S. Lieutenant General Frank Helmick, who headed the U.S. effort to train Iraqi forces from 2008-2009, said no arms or training were given to the Peshmerga later in the war. He recalled interacting with Peshmerga fighters early in the Iraq war, when he was a senior officer in northern Iraq. "They were pretty doggone good fighters," he said. "They weren't very well armed, but they were fierce fighters."