Libya on the brink of becoming a failed state 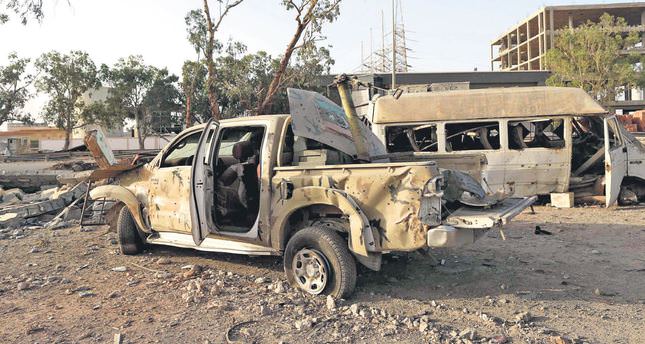 In the absence of political authority and security, Libya has been suffering from growing instability as heavy clashes between militants and Libyan army threaten to tear the country apart

After Islamic State of Iraq and al-Sham (ISIS) militants declared their plan to establish a caliphate over territories stretching from northern Syria to Iraq, Ansar al-Sharia, a Libyan militant group also declared an "Islamic caliphate" and claimed complete control of the restive eastern city of Benghazi after defeating army units loyal to renegade army general Khalifa Belqasim Haftar. "Benghazi has now become an Islamic emirate," said Mohammed al-Zahawi, the spokesman of the Ansar al-Sharia militia, according to Al Arabiya news. However, former army general Haftar rejected the allegations, claiming that the withdrawal of the national Libyan army from certain strategic points in Benghazi should not be seen as a loss of control over the city. A fresh offensive to repel rival militants was also announced. "General Haftar … is currently preparing for a major military operation in Benghazi," Mohamed al-Hegazi, the spokesman for Haftar told Anadolu Agency (AA) by phone.

Heavy clashes have continued unabated between rival groups in the second major Libyan city of Benghazi to gain complete control over the territory. The reports stated that a pro-army group has gained control of al-Galaa Hospital, the largest state-run medical center in Benghazi, which was captured by Ansar al-Sharia a month ago.

Apart from Benghazi, Tripoli has also suffered from the escalating violence over the last two weeks due to increasing clashes between rogue brigades fighting for control of Tripoli International Airport, which led to an all-out battle for control of the entire capital. The two main armed militias, Zintanis and Misratans, have been fighting to seize control of key installations, especially the international airport. The airport, which has been controlled by Zintani brigades, is of crucial importance because it enables militia groups to easily access the center of Tripoli, which means greater control over the capital city. During the heavy fighting around the airport, around 100 people were reportedly killed and 400 wounded. As the country has been descending into political chaos, many Western countries' foreign missions have announced the closure of their embassies and urged their citizens to immediately leave Libya.

Libya has suffered from a chronic absence of security as various actors have emerged. The powerlessness of the central government has led many people to take up arms against the government. State security forces have also failed to protect the government, leaving the country unprotected and open to heavy clashes between rival militias trying to gain authority over the government and the country. Peace and political stability seems far off as no rival militias have been strong enough to put an end to the ongoing war. Dr. Muhammed Adil, an international relations expert, spoke to Daily Sabah about the ongoing political chaos in Libya: "There must be governmental stability in Libya," he said, reiterating the urgent need for a solution to bring an end to the ongoing chaos and lawlessness.

"Peace in Libya also means regional peace. If this chaos cannot be brought under control, neighboring countries like Tunisia and Algeria will pay the price," Dr. Adil added.

Among the major militia groups, Ansar al-Sharia is a Salafist militia, formed by Mohamed al-Zahawi, who fought in Afghanistan for years, emerged in June 2012. They demand the establishment of a state ruled by Sharia in the eastern city of Benghazi. The have been fighting with Libyan army brigades and forces loyal to Haftar for months.

The central government, in a state of continued turmoil, has long been at the mercy of militias that hope to integrate and build a national army against the interim government. After Moammar Gadhafi's ouster, the army has disintegrated, and the central government has gradually lost its power without having much effect on the ongoing violent clashes between armed forces loyal to Haftar and militia groups that serve as part of Libya's regular army in the eastern city of Benghazi. As many militant groups have taken up arms against the fragile central government, the government has decided to hold an early election in June to replace the interim government through democratic methods. However, the problem is that there are nowell established political groups to play a role in holding democratic elections amid the rising unrest.
Last Update: Aug 02, 2014 2:18 am
RELATED TOPICS