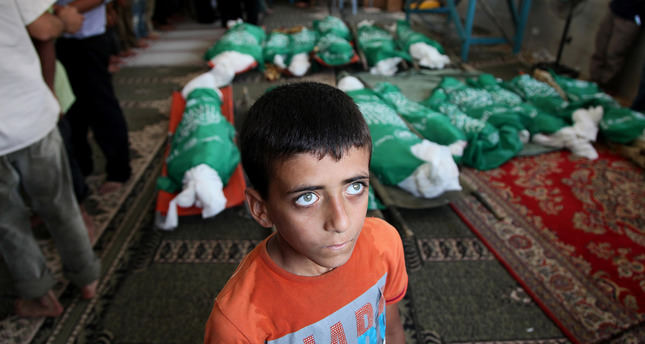 by Yusuf Selman İnanç Aug 02, 2014 12:00 am
As Israel resumes its deadly assault on the Gaza Strip, an analysis of civilian casualties in Israel's wars since its founding in 1948 shows that the high death toll among non-combatants in recent times is no coincidence.

With the efforts of Turkey, Qatar, the U.S. and Israel, a 72-hourlong cease-fire was put into effect early Friday, although Israeli Prime Minister Benjamin Netanyahu and U.S. Secretary of State John Kerry said Israel will continue targeting the tunnels during the truce. Initially it was reported that Israel killed four Palestinians while three Israeli soldiers died. The actors of the temporary cease-fire and a Palestinian delegation, including Hamas and the government of the Palestinian Authority, will continue talks in Cairo. Yet, the Israeli army said they ended the truce on Friday afternoon. As of Friday, the death toll in Gaza passed 1,440, and the number of wounded Gazans hit 8,000. The total number of killed Israeli soldiers is more than 60; however, Hamas' armed wing, al-Qassam Brigades, claims that the toll is around 130.

Since its establishment, Israel has never avoided killing large numbers of unarmed people.

After the decision was made to migrate to the Palestinian lands in the first Zionist Congress, held in 1897, Jews gradually moved to Palestine. After World War I and World War II, the number of Jews migrating to Palestine increased dramatically. In 1948, Israel started an independence war against Arab countries, which was called "Nakba" (big catastrophe) by Palestinians, as more than 1 million Arabs were displaced. In 1948, Israel killed nearly 20,000 Palestinians and several thousand Arab soldiers, while it lost around 4,000 soldiers and 2,000 civilians. In the second Israeli-Arab conflict, in 1956-1957, Israel lost 231 soldiers, while 1,650 Egyptian soldiers were killed, and there were hundreds of civilian casualties. In one of the biggest Israeli-Arab wars in 1973, 776 Israeli soldiers were killed, but the death toll on the Arab side was much higher as 15,000 Egyptians, 6,000 Jordanians and 1,000 Syrians were killed and more than a half million Palestinians were displaced. In 1978, Israel lost 18 soldiers, and 1,200 Lebanese and Palestinian people were killed. The war in Lebanon in 1982 was another catastrophe for Muslim Arabs. While the civil war was continuing in the country, Israel and pro-Israel rightist and Christian factions massacred 17,825 Arabs under the leadership of former Israeli Prime Minister Ariel Sharon who was famous for saying, "When I see dead Palestinians, while I am on the tank, I feel so happy." For three days, Muslim Arabs were murdered, raped and brutally executed. During the brutal attacks, 670 Israeli soldiers died. The massacres, which happened in Shatila refugee camp and Sabra area, have been marked as one of the bloodiest in recent history. Israel also killed 175 Arabs in 1996. In 2006 and 2009 the world again witnessed Israeli aggression on Arabs. While 1,200 civilians and 118 Hezbollah soldiers were killed in 2006, 1,440 Palestinians were murdered in just two days back in 2009 after intensive attacks. The total death toll of Israeli soldiers in 2006 and 2009 was 176. In 2012, during Operation Pillar of Defense, 177 Palestinians were killed, and six Israeli soldiers died. The numbers were released by AFP two weeks ago.
Last Update: Aug 02, 2014 10:55 am
RELATED TOPICS