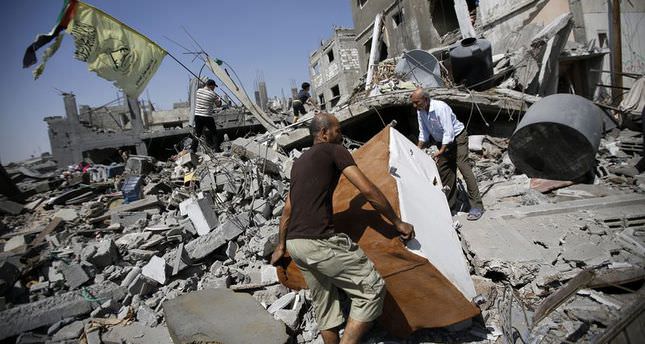 by Aug 03, 2014 12:00 am
A delegation from Palestinian groups Hamas and Islamic Jihad arrived in Cairo on Sunday for indirect ceasefire talks with Israel to be conducted through Egyptian officials, Egyptian sources said.

Truce talks would include Hamas' demand that Egypt ease movement across its border with blockaded Gaza. Israel said on Saturday it would not send envoys as scheduled, accusing enemy Palestinian delegates of misleading international mediators.

A U.S./U.N-brokered ceasefire proposal broke down within hours on Friday, with Israel and Hamas trading blame. Members of the Palestinian Authority, which rules the West Bank, arrived in Cairo on Saturday.

Egypt, which shares a border with Gaza and like Israel opposes Hamas, has positioned itself as a mediator for the Gaza conflict.

Israel began its air and naval offensive against Gaza on July 8 following what it said was a surge of cross-border rocket salvoes by Hamas and other guerrillas. Israel later also launched ground incursions.

Chinese Foreign Minister Wang Yi, who was in Cairo on Sunday, said that a peace proposal should include an immediate ceasefire, ending the blockade and the release of prisoners.

These points were part of a Egyptian initiative to end the violence that has received U.S. backing but that has so far failed to end the crisis.

Palestinian officials say 1,726 people, most of them civilians, have been killed in Gaza. Israel has confirmed that 64 soldiers have died in combat, while Palestinian shelling has also killed three civilians in Israel.