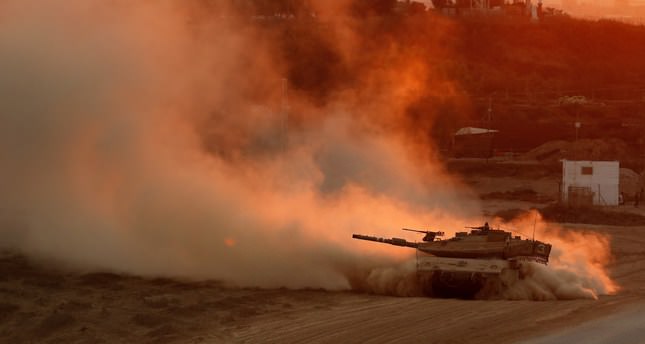 by Aug 04, 2014 12:00 am
Israel will hold its fire in most of the Gaza Strip for a seven-hour "humanitarian window" on Monday, the military said, four weeks into its bloody conflict with Hamas.


According to an army statement, the ceasefire will take place between 0700 GMT and 1400 GMT in all of the Palestinian enclave besides the area east of southern city Rafah, "where clashes were still ongoing and there was Israeli military presence."

Head of the Israeli military activities in the occupied West Bank and Gaza, General Yoav Mordechai, warned in the statement that "if the truce will be violated, the army will respond with fire toward the source of the (Palestinian) fire during the declared hudna," or truce.


Mordechai also called on residents of Abasan al Kabira and Abasan al Saghira, two villages east of Khan Yunis in southern Gaza whose inhabitants had been told to leave their homes, to return beginning 0500 GMT on Monday.

The announcement was received with suspicion and distaust by Hamas "The unilateral ceasefire announced by Israel is an attempt to divert the attention from Israeli massacres," Hamas spokesman Sami Abu Zuhri said in a statement.


"We do not trust this ceasefire, and call on our people to be very cautious," he said.

Medical officials in Gaza said over 1,800 Palestinians have been killed by Israeli fire since the July 8 beginning of the confrontation.