Israeli troops withdraw from Gaza as cease-fire comes into effect 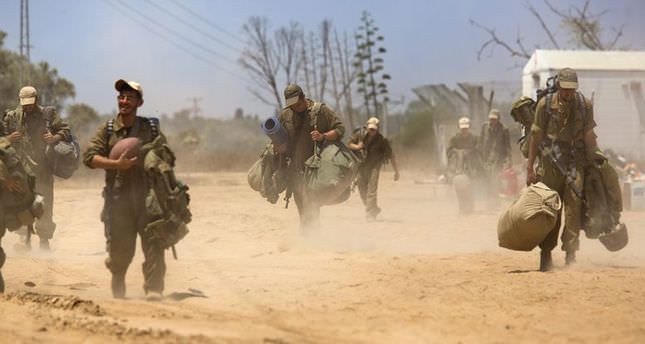 Israel pulls its troops out of Gaza as the 72-hour truce agreement came into effect as of Tuesday morning, the longest-term deal so far between Hamas and Israel

After the Israeli government and four Palestinian factions agreed to Egypt's proposal of a 72-hour cease-fire, starting Tuesday morning, Israel withdrew most of its ground forces from the Gaza Strip, while massing its troops on the Gaza border. The current cease-fire is the longest so far in the conflict, compared to the eight temporary pauses that have occurred since the launch of Israel's Gaza assault that has killed nearly 1,900 Palestinian civilians.

The mutual accusations of violations led to a breakdown of all previous truces. Yet, the situation on the ground remains volatile, with both sides knowing the current ceasefire could easily be violated, quickly derailing the Cairo truce talks. "We are, according to the government's directive, implementing a 72-hour ceasefire this morning," Lieutenant Colonel Peter Lerner said. "The IDF [Israeli Defense Force] will be deployed in defensive positions outside the Gaza Strip. [It] will respond if it is attacked," he added.

A similar cease-fire introduced last Friday collapsed two hours after it had come into effect when Israel resumed its strikes on the Gaza Strip, claiming that militants violated the truce by kidnapping an Israeli soldier.

Israel's main Gaza war mission to neutralize all cross-border tunnels that were built by Hamas militants was completed on Tuesday morning. Afterwards, Israel held calm as both sides halted cross-border attacks after the truce came into effect amid hopes that it would give enough time to reach a long-lasting truce between Hamas and Israel. "Overnight, we completed the destruction of 32 tunnels in the Gaza Strip," Lerner said. At least 32 of the underground passages and dozens of access shafts had been destroyed, as part of Israeli ground operation, dubbed "Operation Protective Edge," which began on June17, Israel Radio and Army Radio said in a statement.

After two days of indirect talks in Cairo between Palestinian groups, including Hamas and Palestinian President Mahmoud Abbas' Fatah party, the Palestinian delegation's demands, which include the cessation of military operations in the Gaza Strip and the lifting of the blockade, was to be discussed during the talks, a senior Hamas official, Izzat Rishq, told AFP late Monday.

The peace talks in Cairo also signal that Hamas would leave Palestinian President Mahmoud Abbas to take the lead in rebuilding the territory in an effort to form a Hamas-Fatah unity government. Israel sent its negotiators to Cairo yesterday for the truce talks, after the cease-fire was held.
Meanwhile, although the Egyptian-proposed truce talk has continued, Palestinian Foreign Minister Riad al-Malki visited the International Criminal Court (ICC) yesterday in order to push for an Israeli war crimes case. Israel rejected all allegations of war crimes during its four-week-long Gaza assault, while the U.N., Turkey and others held Israel accountable for targeting hospitals, the U.N. run schools and civilians' houses.

The Gaza war broke out on July 8 when Israel started to launch airstrikes in response to weeks of heavy rocket fire out of Hamascontrolled Gaza. Israel deployed its ground troops in Gaza on July 17 that led to escalating tension between Israel and Hamas. The fighting has claimed nearly 1,900 Palestinian lives. The U.N. reported that among the death toll, more than 75 percent of those killed in Gaza assault were civilians.
Last Update: Aug 06, 2014 12:39 am
RELATED TOPICS