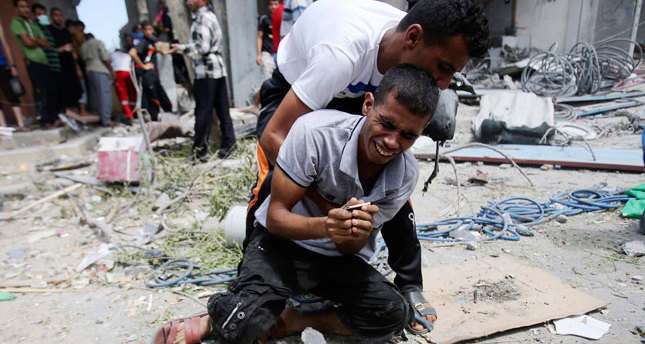 Another attack by the Israeli military on a U.N. school triggered strong condemnation from the U.N., Turkey and the U.S., forcing Israel to declare a unilateral seven-hour cease-fire, which it proceeded to violate only few hours later

Amid growing international alarm over the number of Palestinian civilians killed during Israeli strikes, a seven-hour humanitarian cease-fire called by Israel went into force in the Gaza Strip, and collapsed a few hours after Israel bombed a house in Gaza City. Yet, the Israeli-announced "humanitarian window" limited to a few hours in the fighting has not improved any situation which was already deteriorated on the Gaza Strip. In the strike that resumes the fighting in Gaza, 15 people, mostly women and children, were wounded in Shati Camp, Health Ministry spokesman Ashraf Al-Qidra told Reuters.

As Israel unilaterally declares a break in the fighting due to start at 9:00 a.m. local time (7:00 a.m. GMT), the Israeli announcement of a truce was met with greater suspicion by Hamas, claiming that the aim of the planned break cease-fire was to "divert attention from the Israeli massacres" in the Gaza Strip. "Israel's so-called humanitarian cease-fire is unilateral and it comes at a time when the Zionist enemy wants to distract the world from the massacres they have committed against our people in Gaza," Abu Zuhri told Hamas' Al Aqsa television station. "We don't trust their intentions and we ask our people to take extreme caution."

Monday's cease-fire was the eighth temporary pause since the launch of the deathly Israeli assault on Gaza. Due to violations that led to a breakdown of the truces, all these temporary truces have failed to provide a humanitarian window to many Palestinians who were in dire need of help. The Israeli army stated that it would "respond to any attempt to exploit this window to harm Israeli civilians and soldiers."

Israel announced that the truce would cover the entire enclave of the Gaza Strip while exempting the area east of the town of Rafah in southern Gaza, a focal point of fighting where the Israeli army continuously pounded the area in order to destroy cross-border Hamas tunnels. It is also where the Israeli army bombed a U.N.-run school on Sunday, and killed at least 10 people and injuring dozens more who had been seeking refuge from the violence.

The Israeli strike next to a U.N. school led to international shock and anger, as many leaders denounced Israeli actions in Gaza. U.N. Secretary General Ban Ki-moon condemned the latest Israeli strike as a "moral outrage and a criminal act," and "yet another gross violation of international humanitarian law, which clearly requires protection by both parties of Palestinian civilians, U.N. staff and U.N. premises, among other civilian facilities." The U.S. also condemned "disgraceful shelling outside a UNRWA school in Rafah" and stressed "the suspicion that militants are operating nearby does not justify strikes that put at risk the lives of so many innocent civilians," the U.S. State Department Spokesperson Jen Psaki said in a press statement.

Iran's President Hassan Rouhani described Israel's action on Gaza "as a genocidal massacre of Palestinians by Israel" while calling for the United Nations Security Council to take a solid action against Israel to put an end to the ongoing killing of innocent Palestinians. The Palestinian death toll has passed 1,800. Among them, according to U.N. reports, 330 children have been killed so far and at least 3,000 Palestinian families have sought to take refugee as their homes have been destroyed or damaged.

Meanwhile, as Israel incessantly strikes civilian casualties, a Palestinian mother gave birth to a quadruplet in Gaza under the heavy bombardment of Israel. The birth sparked happiness in the hospital and one of the witnesses, on his twitter post, said "despite mass Israeli killings, we are born again and again."