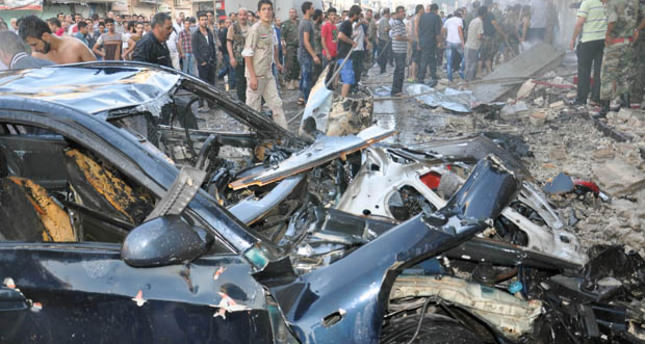 by Yusuf Selman İnanç Aug 05, 2014 12:00 am
The Syrian government has dropped vacuum bombs on Damascus' suburbs, Duma and Kafr Batna, killing 44 people. As clashes intensify between the regime and several opposition groups, the death toll keeps increasing in the country, which has been in the throes of a civil war since 2011.
In the last two days, the U.K.-based Syrian Observatory for Human Rights (SOHR) reported that more than 130 people were killed in the government attacks. SOHR said governmental forces had used vacuum bombs in the last attacks.

A vacuum bomb consists of a container of fuel and two separate explosive charges and after it is dropped, the first explosive charge bursts open the container at a predetermined height and disperses the fuel in a cloud that mixes with atmospheric oxygen, according to experts. The blast wave destroys unreinforced buildings and equipment and kills and injures people. The antipersonnel effect of the blast wave is more severe in foxholes, on people with body armor, and in enclosed spaces such as caves, buildings, and bunkers," reported on Wikipedia. Vacuum bombs, which were previously used by the U.S. and Soviet Union, are not prohibited weapons even though they cause unprecedented suffering and mass casualties,
according to medical reports.

The opposition groups, including the Islamic State of Iraq and al-Sham (ISIS), an offshoot of al-Qaida that is fighting against al-Qaida's Syrian branch, the Nusra Front, have been clashing with both the Syrian regime and Lebanese troops around Qalamun near the Lebanese border. Initial reports said there were many casualties from both sides but did not clarify the number. It was also reported that opposition groups have attacked Arsal, a Lebanese town near the border. Dozens of Lebanese troops died and the Lebanese army said that more than 50 Syrian rebels were killed.

Although millions of Syrians fled their homelands to neighboring countries including Lebanon, Turkey, Iraq and Jordan, there are still civilians who are waiting in Syria for the end of the war to return their normal lives. A source from the region told Daily Sabah, "People still try to live their lives through commercial activities, shopping, cooking food and smoking shisha.

But it is becoming impossible to find a safe area. Either ISIS, the regime or any other opposition group may pose a threat to the residents." When asked why residents have not left Syria yet, the source said, "The people in Damascus' suburbs, in Homs, in Yarmouk are trapped. They cannot exit their cities as the regime troops have surrounded them and do not allow the people to go."

The residents of other cities in Syria that are close to the borders, like Raqqa, are luckier as they can find a way to flee to another country. But those who try to survive in the inner cities are completely trapped by the attacks from the government, the ISIS threat and geographic conditions.
Since 2011, more than 170,000 people have died in the civil war, according to U.N. reports.
Last Update: Aug 05, 2014 4:52 pm
RELATED TOPICS