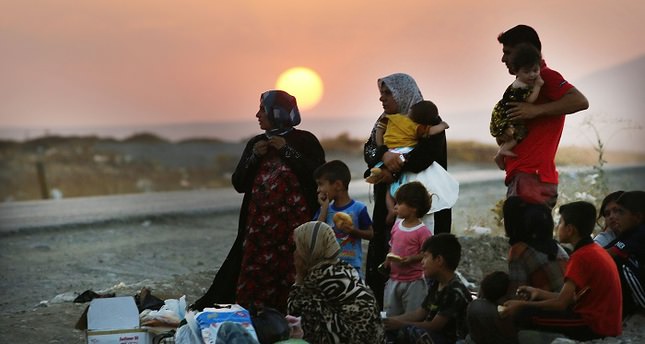 by AA Aug 05, 2014 12:00 am
Thousands of members of the Yazidi religious minority in northern Iraq have fled for shelter following the advance of militant Islamic State – ISIS – rebels into their homeland on Tuesday.

The Yazidi people, an ancient minority, are a significant part of the population in Sinjar town, west of Mosul. Their faith is composed of elements of Christianity, Sufi Islam and Zoroastrianism and is regarded as heretical by Islamist hardliners.

Many Yazidis have gone to a mountainous region called Lalish, about 50km out of Dohuk, north of Mosul.

On Sunday, Islamic State seized Sinjar after forcing the Kurdish forces out of the region. Local people said the militants would execute them for refusing to convert to Islam.

Baba Sheik, a Yazidi spiritual leader, told Anadolu Agency that the ISIS militants demanded that his community become Muslim, otherwise they would be killed. "We have been given a few hours to take a deicision," he said.

Around 30,000 Yazidis were left stranded in Sinjar mountain, said local activist Narin Shemo, claiming that 45 children had died of thirst and that 50 women were being held at Telafar Airport for "jihad" marriage with the militants.

Islamic State has previously issued a decree that Christians in Mosul could stay in the city, but should adopt Islam.

On Sunday, Iraqi Kurdish leader Massoud Barzani vowed not to leave an acre of Kurdish land to militants and to protect Mount Sinjar near the Syrian border, as well as the Yazidi people taking shelter there.

Tension continued to remain high in Iraq after the militants, also backed by tribal fighters, seized Iraq's second-largest city Mosul on June 10 and captured a number of other cities in the north, including Tikrit and Tal Afar.

They also reportedly control Al Qaim, Rawah, Anah, Al Ratba and Haditha in the western province of Al Anbar. Around one million civilians have been displaced so far amid the ongoing clashes in the country.