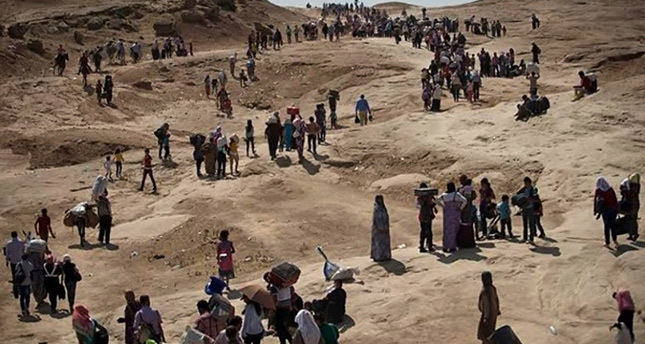 Kurdistan Regional Government (KRG) troops in the Sinjar region are clashing with Islamic State of Iraq and al-Sham (ISIS) militants rampageing across Iraq. Hundreds of Kurds are fleeing from ISIS advances

The Islamic State of Iraq and al-Sham (ISIS), which is seeking to expand its power to the cities held by the Kurdish forces, have been clashing with Kurdish troops and Kurdish People's Protection Units (YPG) near Sinjar. Kurdish Regional Government (KRG) President Massoud Barzani said, "We will take every inch of Sinjar." Criticizing the international community and central Iraqi government for not giving sufficient help to Kurds for fighting ISIS, Barzani said "Iraq and international forces have not helped peshmerga to combat ISIS, and have even obstructed peshmerga buying weapons in order to defend ourselves."

KRG has recently asked the U.S. to give more weapons, yet the U.S. has not responded positively, and said there will be intelligence sharing through the deployment of drones. Kurdish forces claimed that they have re-captured Sinjar but the information has not been confirmed by independent news sources. Ankara-based Anadolu Agency reported that YPG forces have been clashing heavily with ISIS militants in Sinjar, Rabia and Dohuk, located near the northern Iraqi city of Mosul, which has been held by ISIS for more than a month.

A Reuters correspondent yesterday reported that many fighters from PKK are crossing the Iraqi border, and joining the Kurdish forces to fight against ISIS. ISIS - which has operations in both Iraq and Syria, and is internationally recognized as a terrorist group - captured cities in Iraq and Syria after dismantling itself from al-Qaeda last year, and declared an Islamic caliphate last month.
Last Update: Aug 06, 2014 1:08 pm
RELATED TOPICS