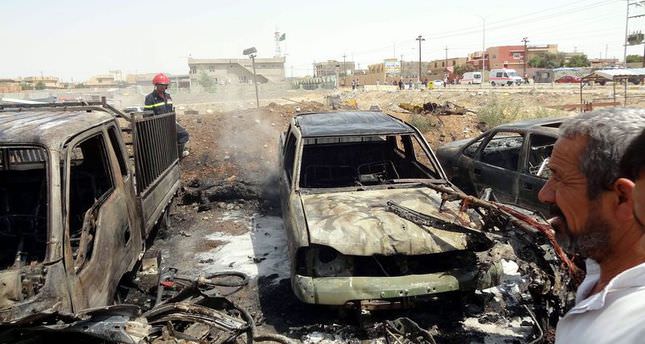 by AA Aug 06, 2014 12:00 am
Iraqi security forces have imposed a curfew on the oil rich city of Kirkuk to prevent self-proclaimed Islamic State of Iraq and Al-Sham (ISIS) militants from provoking trouble, police sources said.

The curfew came into force at 11 p.m. local time (GMT 20:00) on Tuesday after unidentified people, believed to be ISIS supporters carrying Kurdish Regional Government's flags, attempted to stir up trouble, according to information the Anadolu Agency received from security sources.

Kirkuk, 80 kilometers south of the Kurdish regional capital of Arbil, has been under the control of Kurdish forces, known as peshmerga, since the Iraqi army fled the city in the face of a major ISIS-led offensive in early June.

The road between Kirkuk and Arbil is considered the region's lifeblood with its busy traffic of lorries carrying crude oil across the border with Turkey and Iran.

Over the last month, the Kurdish government has deployed thousands of peshmerga along the city's southern border to prevent a new northern advance by ISIS forces, which hold a strong presence in cities and towns south of Kirkuk.

Fighting in Mosul between Kurdish and ISIS forces intensified last week when ISIS-led militants seized control of several towns in the area and began to threaten the country's largest hydroelectric dam, known as the Mosul Dam.

The towns recently captured by ISIS include Sinjar, which is the ancestral home of the Yazidi religious minority. Yazidi is an eclectic religious sect fusing Zoroastrian, Manichaean, Jewish, Nestorian Christian and Islamic elements. It is regarded as heretical by orthodox Islamic scholars.

As many as 500 Yazidis have been killed by ISIS militants since they seized control of the town Sunday, forcing at least 30,000 families to flee to the cities of Arbil and Duhok in the north, according to Yazidi officials.

Tension continued to remain high in Iraq after the ISIS-led militants, also backed by tribal fighters, seized Mosul on June 10 and captured a number of other cities in the north, including Tikrit and Tal Afar.