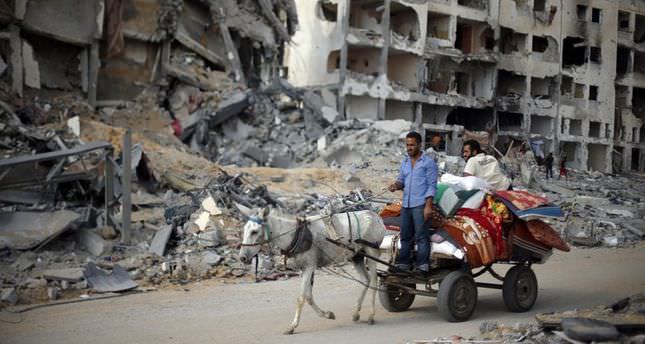 by AA Aug 06, 2014 12:00 am
The Israeli army has decided to deploy a rapid reaction force along the border with the Gaza Strip until a ceasefire agreement is hammered out with Palestinian groups in the Palestinian enclave, the Israeli radio reported Wednesday.

The force would be on constant alert to respond to any orders of ground incursion into the enclave or in case of the unearthing of an "attack" tunnel linking Gaza to Israeli territory, the broadcaster said.

The radio reported that the army has released figures claiming that half of the victims of its almost one-month offensive in the Gaza Strip were "saboteurs."

According to the army's figures, Israeli troops had pounded over 4700 targets in the Gaza Strip while over 3300 rockets were fired from the Gaza Strip at Israel. As many as 32 tunnels were also destroyed.

Palestinian factions and Israel have endorsed an Egyptian proposal for a three-day ceasefire in the Gaza Strip starting Tuesday.

Israel has since completely withdrawn its forces from the besieged Palestinian territory.

The two sides are set to start indirect talks in Cairo for a durable ceasefire.

Palestinian factions have presented a set of demands for any durable ceasefire with Israel, including the lifting of an Israeli siege imposed on Gaza since 2006 and the release of Palestinian prisoners.

According to the Palestinian Health Ministry, at least 1867 Palestinians, mostly civilians, were killed and 9470 wounded in Israeli attacks since July 7.

The Israeli army, for its part, has confirmed the killing of 64 troops and the injury of 651 others in Gaza combat operations, while three civilians were killed in rocket attacks on Israeli cities.