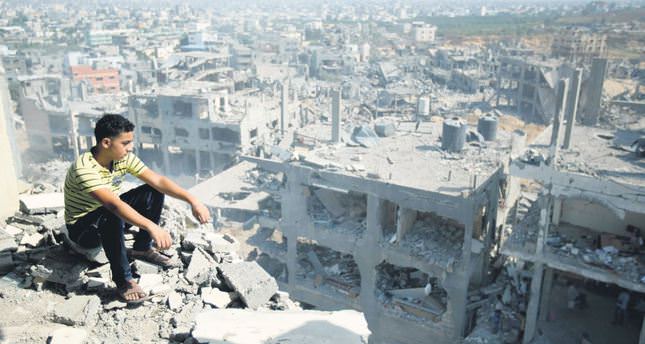 Gazans who went to see their homes at the beginning of three-day-long cease-fire found demolished homes and streets, while peace talks continue between Israel and Palestinian factions

Israeli military operations in Gaza, which lasted more than three weeks, left a ghost city behind. The numbers of casualties and demolished buildings show that a new wave of refugees will appear, and it will take a long time to rebuild the besieged Gaza. According to official numbers, the death toll is 1,868. The casualties include 246 women and 426 children. The number of wounded Gazans reached 9,563 with 2,877 children and 1,853 women.

On the Israeli side, the death toll is 67 according to the Israeli Defense Force. But Hamas' armed wing al-Qassam brigades claim that more than 150 Israeli soldiers were killed during the ground invasion.

Gazans who fled to relatively safer areas during the attacks returned to their neighborhoods to see their homes and collect what remained of their belongings. Yet, what they saw was only ruin. The official numbers indicate that 5,510 homes were destroyed, 30,920 more were damaged, and 475,000 Gazans were internally displaced during the attacks. It is not known yet how many of these internally displaced people will return to their homes; and 121 mosques were damaged, and 43 others were destroyed. Israel also attacked schools, damaging 188 of them. Hospitals and medical centers were also hit, and 24 of them were damaged.

An idea to rebuild Gaza with international funding, similar to the Marshall Plan, also known as the European Recovery Program, for European countries after World War II, is on the table. Hamas opposes this idea by claiming that it will be leaving Gaza in the hands of Israel and the international community, which mostly had an explicit pro-Israel stance during the attacks. However, Hamas has not offered a clear plan to rebuild Gaza itself. Hamas officials highlight the significance of the acceptance of their conditions for a permanent ceasefire. Lifting the blockade, building an international airport, allowing Gazan fishermen to be able to fish without any specific Israeli restrictions and keeping the exit gates open for the influx of goods are Hamas' conditions. The Israeli side does not seem to accept all of these conditions and demands that the international community disarm Gaza completely.

While peace talks continue, protests against Israeli aggression continue around the world with groups in many countries organizing demonstrations to condemn Israel.

A group of people from London Palestine Action occupied a weapons factory in Birmingham that belongs to Israel. After the resignation of Britain's first female Muslim cabinet minister, Baroness Sayeeda Warsi, on Tuesday, U.K. Deputy Prime Minister and Chairman of the Liberal Party Nick Clegg called on the government to suspend weapons agreements with Israel. The U.K. Prime Ministry said no new weapons agreement was made with Israel after the attacks started.
Last Update: Aug 07, 2014 1:59 pm
RELATED TOPICS