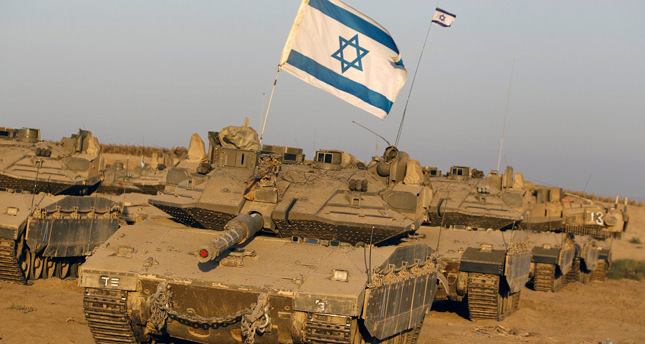 by AA Aug 07, 2014 12:00 am
An Israeli military source has threatened to respond to any rocket fire by Palestinian faction Hamas after the expiry of a three-day ceasefire in the Gaza Strip.

"Talks are being held at the highest levels in the Israeli army after Hamas' threats to resume fire if the Palestinian demands are not met," the source told Anadolu Agency on Thursday.

Hamas' Ezzeddin al-Qassam Brigades earlier vowed to resume fire on Friday if Israel failed to lift the years-long blockade on the Gaza Strip.

"If the enemy failed to fulfill conditions of the resistance and lift the Gaza siege, we will resume the battle at 08:00am on Friday after the end of the 72-hour ceasefire," a leader of the Qassam Brigades told AA.

"The inflammatory statements made by Hamas are part of a psychological warfare in an attempt to pressure negotiators in Cairo," the source said.

An Egypt-proposed three-day ceasefire in the Gaza Strip between Palestinian factions and Israel will expire at 0800am on Friday.

The ceasefire was brokered following a month of incessant Israeli strikes against the Gaza Strip that left 1886 Palestinians dead and 9800 others injured. The attacks have also turned thousands of Gaza's buildings into mere rubble.

An Israeli source earlier denied any agreement to extend the ceasefire with the Gaza-based Palestinian factions, Israeli daily Haaretz reported.