At least 68 Yazidis die of heat, thirst stuck in Iraq 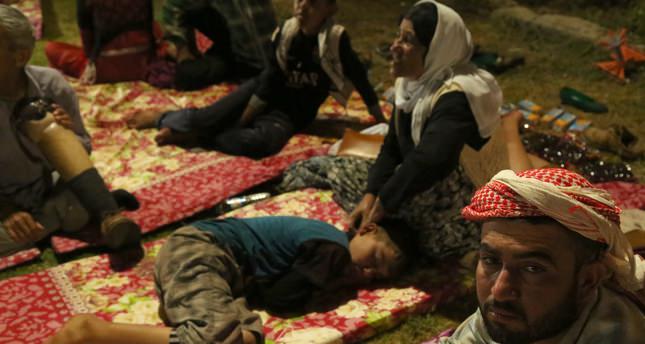 by AA Aug 08, 2014 12:00 am
A total of 68 Yazidis, stuck in the mountains in Iraq's Sinjar region, died of thirst and because of the heat, a local resident told The Anadolu Agency on Friday.

Ali Sinjari, a resident in the Sinjar region, added that 30 Yazidis, who had been trapped in the mountains for five days, managed to escape across the Syrian border by traveling at night and hiding during the day.

On Friday morning, 51 others were rescued by helicopters, which according to eyewitnesses, belonged to the Kurdish peshmergas,

One of the rescued, 67-year-old Hemse Micko told the AA that 24 members of his family still remained trapped in the mountains.

Thousands of Yazidis, a Kurdish ethno-religious community in northern Iraq targeted by ISIS militants who consider them to be 'devil-worshippers,' have fled and are reported to be trapped in the mountains.

"Families who fled the area are in immediate need of urgent assistance, including up to 25,000 children who are now stranded in mountains surrounding Sinjar and are in dire need of humanitarian aid including drinking water and sanitation services," had said UNICEF in a statement released Tuesday.

More than a hundred Yazidis staged a rally in Washington D.C. before the White House on Thursday and demanded help from U.S. President Barack Obama.

Later that day, Obama authorized targeted air strikes to protect the American personnel in the northern city of Erbil -- capital of the Kurdish regional government -- and to help administer food and water supplies to Yazidis civilians who have sought refuge from ISIS militants.

A Yazidis lawmaker said Tuesday that as many as 500 Yazidis -- who constitute the majority of the population in the Nineveh Province of northern Iraq -- had been killed by ISIS militants in Sinjar, since Sunday, when they captured the peshmerga-controlled towns of Sinjar and Rabia in Mosul.
Last Update: Aug 08, 2014 3:31 pm
RELATED TOPICS