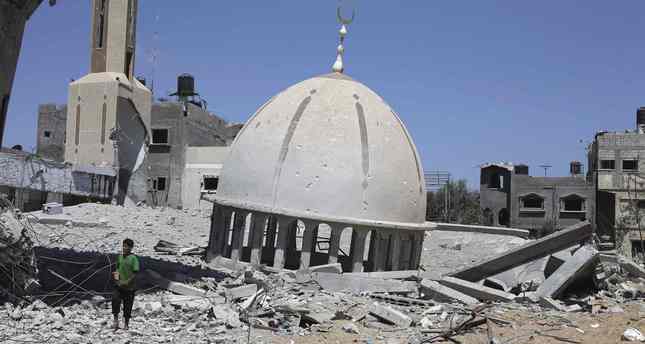 by AA Aug 08, 2014 12:00 am
An ongoing Israeli onslaught against the Gaza Strip has completely destroyed 60 mosques in the embattled Palestinian territory, the Palestinian Ministry of Awqaf and Religious Affairs said.

In a Friday statement, the ministry said that 20 mosques had been razed in Gaza City, 11 in the northern Gaza Strip, 17 in the southern Khan Younis city, 10 in central Gaza Strip and two in the southern Rafah city.

Israel has pounded the Gaza Strip for almost a month since July 7, killing at least 1894 Palestinians and injured 9817 others. Thousands of homes have also been destroyed in the offensive.

At least 64 Israeli soldiers have also been killed in battles with Palestinian fighters in the Gaza Strip and three civilians by rocket fire, according to Israeli figures.

Israel resumed its airstrikes on the Gaza Strip on Friday after the expiry of a three-day ceasefire with Palestinian factions following the collapse of their indirect talks in Cairo.

Palestinian factions have linked the extension of a ceasefire with Israel to the latter's approval of their demands, including lifting a years-long blockade on the Gaza Strip and the creation of a seaport.

The Gaza Strip, home to 1.8 million Palestinians, has been reeling under a crippling Israeli blockade since 2006, badly affecting the livelihood in the seaside enclave.
Last Update: Aug 08, 2014 3:25 pm
RELATED TOPICS