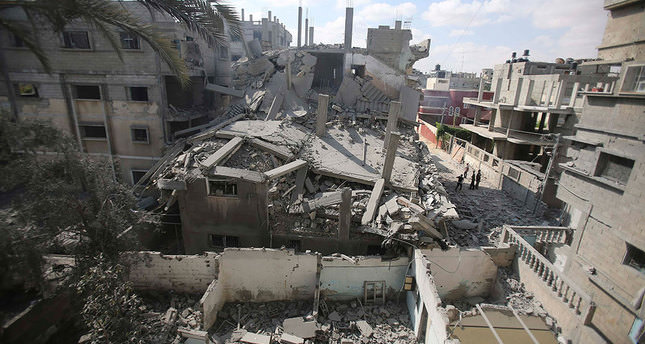 by AA Aug 09, 2014 12:00 am
Five Palestinians were killed in Israeli attacks on Saturday, taking the death toll from Israel's deadly offensive in the blockaded territory to 1904, a Health Ministry spokesman said.

He said three more Palestinians were retrieved from under the rubble of a mosque bombed by Israeli forces in the central al-Nusairat refugee camp on Saturday.

The latest fatalities bring to 1904 the number of Palestinians killed in relentless Israeli attacks on the Gaza Strip since July 7, according to the Health Ministry. More than 9800 others have been injured.

Violence flared up in the Palestinian territories on Friday as soon as a three-day ceasefire between Israel and Gaza-based Palestinian factions expired.

Israel claims that the offensive aims at undermining the ability of Palestinian rockets to fire rockets.

At least 64 Israeli soldiers have also been killed in battles with Palestinian fighters in the Gaza Strip and three civilians by rocket fire, according to Israeli figures.