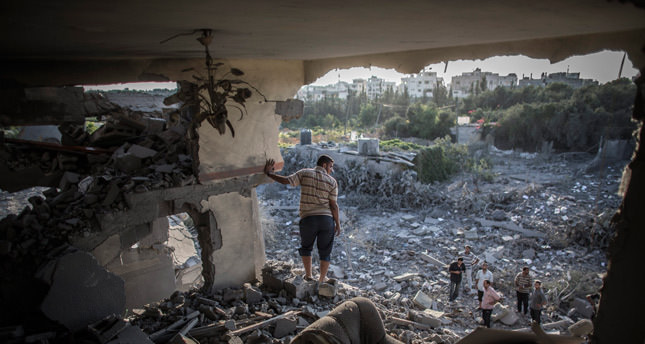 by Daily Sabah Aug 09, 2014 12:00 am
After the 72-hour ceasefire agreement expired at 8:00 a.m. local time on Friday morning, the Israeli military resumed airstrikes on Gaza after Palestinian factions refused to extend a cease-fire and resumed firing rockets into Israel. After the three days lull, the Palestinian death toll is expected to rise due to Israeli attacks. As Israel restarted its raids in southern Gaza, at least 10 airstrikes were launched in response to rocket and mortar fire from Gaza on Friday, one hitting the backyard of a mosque, killing a 10-year-old.

According to Agence France-Presse, the Palestinian interior ministry and witnesses said, the Israeli military struck targets in Jabaliya in the north, Gaza City and in the center of the Palestinian enclave.

Israel has continued its attacks as Hamas' resistance still continues unabated. Israel rejects the Palestinian delegation's demands including the cessation of military operations in the Gaza Strip and the lifting of the eight-year blockade. "All the Palestinian factions, including Hamas, have agreed not to renew the cease-fire because [Israel] is refusing to accommodate our demands," Hamas spokesman Fawzi Barhum told AFP. Many Gazans whose humanitarian conditions are getting worse, blamed Israel for the hostilities toward Palestinians and said that they supported Hamas's conditions.

As peace talks have continued on shaky ground, Israel declared that the Israeli delegation pulled out of talks in Cairo on extending the cease-fire with Hamas after it ended and violence resumed on Friday. "Israel will not negotiate under fire," an Israeli military official stated, reiterating that "Hamas breached the cease-fire" even though Israel had accepted to extend it by another three days.

According to the latest reports, Israeli negotiators left Cairo and returned to Israel on Friday morning. The latest cease-fire became the longest break in violence, compared to the eight other temporary pauses since the launch of Israel's Gaza assault that killed nearly 1,900 Palestinians. The mutual accusations of violation led to a breakdown of every ceasefire.

All cease-fire agreements have been violated so far, quickly derailing the indirect negotiations brokered by Egyptians. The Gaza war broke out on July 8 when Israel started to launch airstrikes in Hamas-controlled Gaza. Israel has deployed its ground troops in Gaza on July 17 that led to escalating tension between Israel and Hamas. The U.N. reported that the death toll was 75 percent of those killed in Gaza were civilians.
Last Update: Aug 09, 2014 10:16 am
RELATED TOPICS