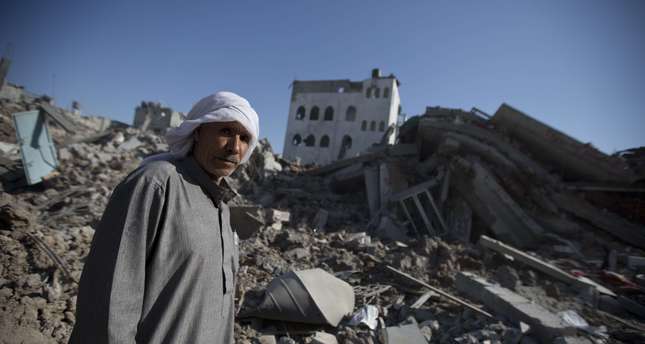 by AA Aug 10, 2014 12:00 am
The Palestinian resistance movement Hamas said Sunday that it was considering an Egypt-proposed 72-hour ceasefire in the blockaded Gaza Strip to give Palestinian and Israeli negotiators more time to discuss a durable ceasefire arrangement.

"The movement is considering the Egyptian proposal for a 72-hour ceasefire so that Palestinian and Israeli negotiators can resume their talks in Cairo," Hamas spokesman Sami Abu Zuhri said in a statement.

He asserted that his group's position on the proposed ceasefire depends on the seriousness of the Israeli side about calm in the besieged coastal enclave.

Media reports suggested earlier today that the Palestinian delegation currently in Cairo to be part of indirect talks on the situation in Gaza had agreed to a new 72-hour ceasefire.

The Israeli delegation to the indirect negotiations had left Cairo Friday and has not returned since.

An earlier Egyptian-brokered ceasefire had expired on Friday, opening the door for resumed attacks by Palestinians and the Israelis.

Until late Saturday, Israel had killed 11 Palestinians in the resumed airstrikes on different parts of the Gaza Strip, according to Palestinian medical sources.

At least 1918 have been killed in Israeli attacks since July 7, while around 10,000 others have been injured.

Palestinian factions had also fired around 30 rockets on different areas in southern Israel since Friday, according to the Israeli army.

At least 64 Israeli troops were killed in Gaza combat, while three civilians lost their lives to rocket attacks launched by Palestinian factions.Palestinian negotiators in Cairo say they have accepted an Egyptian proposal for a new, three-day cease-fire with Israel.

The decision aims to clear the way for renewed negotiations with Israel on a long-term truce arrangement in the Gaza Strip.

The officials, representing various Palestinian factions, spoke on condition of anonymity because they were discussing sensitive negotiations.

Israel walked away from negotiations over the weekend after rocket fire resumed, saying it would not negotiate under fire.