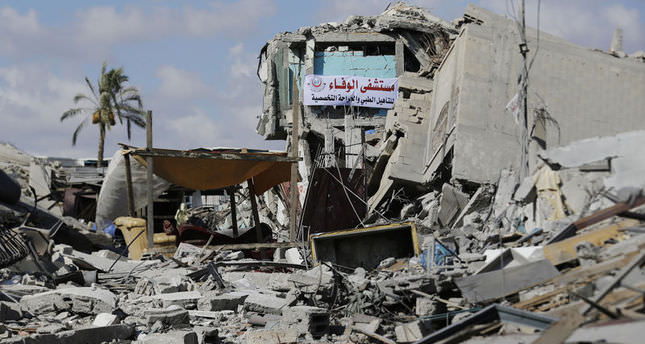 by AA
Aug 11, 2014 12:00 am
The Israeli offensive on the Gaza Strip, currently on pause, has caused infrastructural losses estimated at some $50 million, a Palestinian official said Monday.

Electricity is gradually returning to homes in the Gaza Strip, which is expected to improve the water supply in the embattled enclave, he said.

Much of the Gaza Strip's power grid, including the line that carries electricity from Israel, was damaged during Israel's offensive, which began on July 7.

Gaza's main power plant was also forced to shut down after being targeted late last month during Israel's weeks-long assault on the coastal strip.

Power outages have caused severe water problems, with the pumping stations that carry water from wells to homes shutting down due to the lack of electricity.

Recurrent power outages have also led to the closure of wastewater treatment stations, which has forced municipal authorities to discharge wastewater into the sea without treatment, which could lead to a major health crisis, Hegazi warned.

The municipality is currently relying on generators that need over 15,000 liters of fuel daily, which local authorities cannot afford-especially under the Israeli assault, he said.

"The fuel supply can only meet the strip's needs for two days," he warned.

Since late last month, when Israeli attacked the 65-megawatt power plant that supplies roughly one third of the strip's total electricity needs, the Gaza Strip-home to some 1.8 million Palestinians-has groaned under daily, 21-hour electricity outages.

The strip has obtained around a quarter of its 420- to 460-megawatt electricity needs from Israel for several years. Egypt, which has supplied Gaza with 27 megawatts, has increased the supply by five megawatts since the beginning of the Israeli offensive.

Israel claims its offensive, dubbed "Operation Protective Edge," is aimed at ending the ability of Gaza-based Palestinian factions to fire rockets at the self-proclaimed Jewish state.