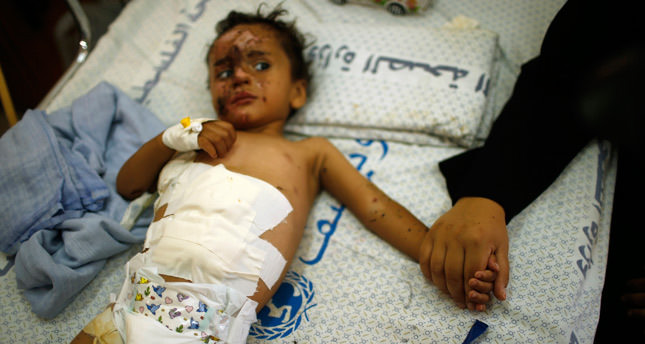 by Daily Sabah Aug 11, 2014 12:00 am
Israeli forces have continued to pound the Gaza Strip while Israeli delegates have not returned to Cairo to reach an agreement that is expected to provide a permanent cease-fire. After the most recent Israeli airstrike, the death toll in Gaza has reached 1,917 since the operation started on July 7.
Palestinian representatives have also threatened to pull out of the Egypt-mediated negotiations. Palestinian officials were warned to end the talks, unless Israel shows a willingness to reach an agreement and stop the attacks. "We told the Egyptians that if the Israelis are not coming and if there is no significant development, we are leaving today,"

Palestinian negotiator Bassam Salhi told the Associated Press on Sunday. "Israel will not negotiate under fire," Israeli Prime Minister Benjamin Netanyahu said in broadcast remarks at the weekly meeting of his cabinet, in Tel Aviv. "The operation will continue until its objective - the restoration of quiet over a protraced period - is achieved. I said at the beginning and throughout the operation - it will take time, and stamina is required," added Netanyahu.

At the same time, protests continue against Israel in the West Bank, which is under Israeli occupation. Youssef al-Anati said his 11-year-old nephew, Khalil, was shot dead by Israeli forces during a protest. Israel claimed that he was hurling stones and taking part in a violent riot but al-Anati refused the claims and said "Khalil was standing outside and at a distance some kids were throwing stones at the Israeli army," Anati told Reuters. "Suddenly Khalil collapsed to the ground and we rushed to him; he was all covered in blood."

On Saturday, Israel launched more than 30 air attacks in Gaza on Saturday, killing nine Palestinians. As a response to the Israeli attacks Palestinian armed forces fired rockets. Since the operation started Israel has demolished 5,510 homes and damaged 30,920 others. It was reported that approximately 475,000 people have been internally displaced.
Last Update: Aug 11, 2014 12:00 pm
RELATED TOPICS