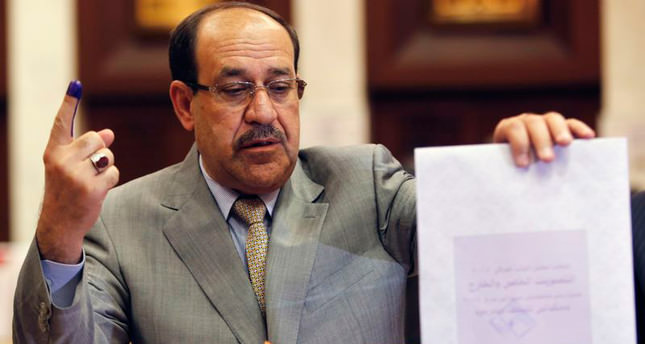 by Anadolu Agency Aug 11, 2014 12:00 am
Iraqi Prime Minister Nuri al-Maliki indicated that he will not drop his bid for a third term and accused the president of violating the constitution in a tough televised speech likely to deepen political tensions as insurgency rages.

Several police sources also said the forces had taken up positions at key entrances to the sprawling capital.

Maliki, seen as an authoritarian and sectarian leader, has defied calls by Sunnis, Kurds, some fellow Shi'ites and regional power broker Iran to step aside for a less polarising figure who can unite Iraqis against ISIS militants.

Iraq's embattled Prime Minister Nouri al-Maliki, in a surprise speech late Sunday, accused the country's new president of violating the constitution, plunging the government into a political crisis at a time it is battling advances by ISIS (self-proclaimed Islamic State of Iraq and al-Sham) militants.

Al-Maliki is seeking a third-term as prime minister, but the latest crisis has prompted even his closest allies to call for his resignation. A parliament session scheduled for Monday to discuss the election and who might lead the next Iraqi government was postponed until Aug. 19.

On Sunday night, in a nationally televised speech, al-Maliki declared he will file a legal complaint against the new president, Fouad Massoum, for committing "a clear constitutional violation."

Al-Maliki, whose Shiite-dominated bloc won the most seats in April elections, accused Massoum of neglecting to name a prime minister from the country's largest parliamentary faction by Sunday's deadline. He said the president has violated the constitution "for the sake of political goals."

Al-Maliki, speaking on Iraqi TV for the first time since U.S. forces launched airstrikes and humanitarian airdrops in Iraq last week, said the security situation will only worsen as a result of Massoum's actions.

"This attitude represents a coup on the constitution and the political process in a country that is governed by a democratic and federal system," al-Maliki said. "The deliberate violation of the constitution by the president will have grave consequences on the unity, the sovereignty, and the independence of Iraq and the entry of the political process into a dark tunnel.

The political infighting could hamper efforts to stem advances by ISIS militants who have seized a large swath of northern and western Iraq in recent weeks.

President Barack Obama warned Americans on Saturday that the new campaign to bring security in Iraq requires military and political changes and "is going to be a long-term project." Obama said Iraqi security forces need to revamp to effectively mount an offensive, which requires a government in Baghdad that the Iraqi military and people have confidence in. Obama said Iraq needs a prime minister an indication that suggests he's written off the legitimacy of the incumbent, al-Maliki.

Critics say the Shiite leader contributed to the crisis by monopolizing power and pursuing a sectarian agenda that alienated the country's Sunni and Kurdish minorities.

After al-Maliki's speech, Brett McGurk, a deputy assistant secretary of state for Iraq and Iran, expressed support for Massoum.

"Fully support President of Iraq Fuad Masum as guarantor of the Constitution and a PM nominee who can build a national consensus," McGurk tweeted.

The U.S. airstrikes have reinvigorated Kurdish forces battling the ISIS militants in northern and western Iraq. Kurdish forces retook two towns from the militants on Sunday, achieving one of their first victories after weeks of retreating, a senior Kurdish military official said.

Kurdish peshmerga fighters were able to push the militants of the ISIS group out of the villages of Makhmour and al-Gweir, some 28 miles (45 kilometers) from the Kurdish capital of Irbil, Brig. Gen. Shirko Fatih said.

The United States launched a fourth round of airstrikes Sunday against militant vehicles and mortars firing on Irbil as part of efforts to blunt the militants' advance and protect American personnel in and around the Kurdish capital.

U.S. warplanes and drones have also attacked militants firing on minority Yazidis around Sinjar, which is in the far west of the country near the Syrian border.

In the Kurdish capital on Sunday, the president of the semi-autonomous Kurdish Regional Government, Massoud Barzani, said American military support has been effective thus far, but, he added, peshmerga soldiers require more firepower to defeat the militants.

Barzani met Sunday with French Foreign Minister Laurent Fabius, who traveled to Baghdad and Irbil pledging France's commitment to providing humanitarian aid. Fabius also met with al-Maliki and called on Iraqi leaders to unite in the face of the escalating crisis.

"The marching order is solidarity," Fabius said. He called on Iraqis to form a "government of broad unity so that all Iraqis feel represented and together lead the battle against terrorism."

A week ago, Al-Maliki ordered the Iraqi air force to support Kurdish forces against the militants, in a rare instance of cooperation between Baghdad and the Kurdish regional government, which have for years been locked in disputes over oil and territory.

Meanwhile, thousands of Yazidi refugees fleeing the militants continued to pour across the border from Syria into Iraq after a weeklong journey through blazing hot mountains. Followers of an ancient religion with links to Zoroastrianism, the Yazidis said the militants had given them the choice of converting to their way or dying.

As they crossed the border, many Yazidis said they had lost sisters, daughters, young children and elderly parents during the trip. They said militants sprayed gunfire at fleeing crowds, sometimes splitting up families by taking the women and killing the men.

It was not clear how many Yazidis were missing. In the span of 30 minutes, about a dozen displaced Yazidis approached one journalist, pleading for assistance to find their loved ones.

British officials estimated Saturday that 50,000 to 150,000 people could be trapped on Sinjar Mountain, where they fled to escape the ISIS militants, only to become stranded there with few supplies.

Britain said its air force has already dropped water containers and solar lanterns over the mountains.

In a statement issued Sunday, the European Union said it was "appalled by the rapid deterioration of the humanitarian situation, with hundreds of thousands civilians, mainly from minorities, fleeing the areas of conflict."

Some of the militants' acts "may constitute crimes against humanity and must be investigated swiftly, so that the perpetrators are held accountable," the EU said.