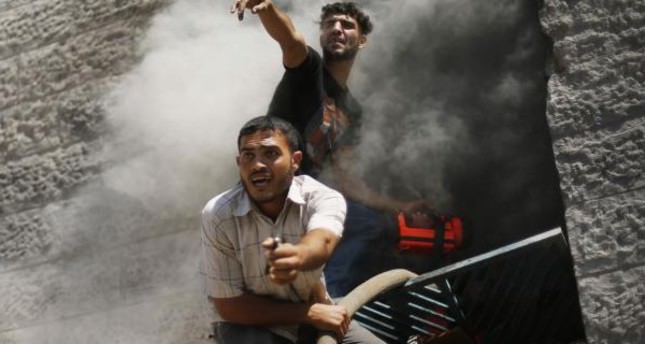 by Daily Sabah Aug 12, 2014 12:00 am
After the previous cease-fire expired last Friday without a deal being reached, Israel and Hamas agreed to a fresh three-day Gaza truce, as Israeli negotiators arrived in Cairo to resume indirect peace talks with Palestinians.

The cease-fire agreement came into effect at 9:00 p.m. GMT on Sunday after days of intense discussion by Egyptian brokers. There have been no reports of breaches of the cease-fire so far, after it took effect. However, there has not been much optimism as to whether the current Gaza truce would last putting an end to the lengthy war in Gaza. After the announcement of holding talks on ending the month-old Gaza war, United Nations Secretary General Ban Ki-moon praised the ongoing peace talks while urging both sides to "avoid any steps which would lead to a return to violence."

Meanwhile, apart from the Gaza Strip, the Israeli-Palestinian clashes have been continuing in the West Bank as the Israeli troops killed a Palestinian in the occupied West Bank on Monday during a raid on his house near the city of Nablus, according to Reuters.

Hamas spokesman Sami Abu Zuhri stated that the new negotiation would be "the last chance" for reaching a deal between the two parties. Egypt's Foreign Ministry also called on "both sides to exploit this truce to resume indirect negotiations immediately and work towards a comprehensive and lasting cease-fire agreement," according to Reuters. Hamas had refused to extend the previous truce, after the Palestinian delegation's demands including the cessation of military operations in the Gaza Strip and the lifting of the eight-year blockade were rejected by the Israeli delegation.

As peace talks have continued on a volatile ground, many short-lived ceasefire agreements have come into effect so far since the launch of Israel's Gaza assault that has killed nearly 2,000 Palestinian civilians. The mutual accusations of violation led to a breakdown of all truces.

All cease-fire agreements have been easily violated so far, as to quickly derailing the indirect negotiations brokered by the Egyptians.

The previous cease-fire ended and violence resumed last Friday when the sides failed to reach a deal to prolong a previous three-day truce. Israel declared last Friday that the Israeli delegation pulled out of talks in Cairo on extending a truce with Hamas.

The one-month Gaza war broke out on July 8 when Israel started to launch airstrikes in Hamas-controlled Gaza. After the Israeli ground invasion to
Gaza launched on July 17, the tension between Israel and Hamas has escalated and led to an increasing Palestinian death toll that has claimed nearly 2,000 Palestinians. The U.N. reported that more than 75 percent of those killed in the Gaza assault were civilians.
Last Update: Aug 12, 2014 9:30 am
RELATED TOPICS