US airstrikes slow ISIS advance,threat not removed yet 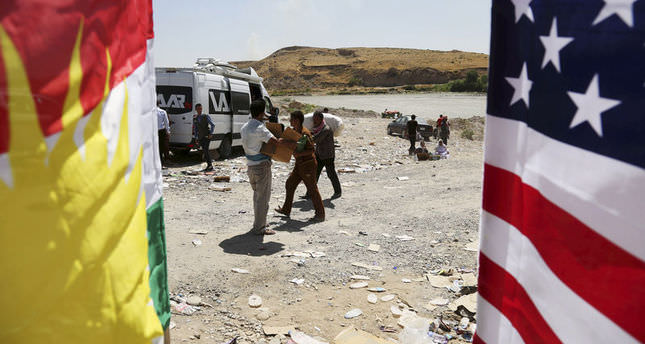 U.S. continues hitting ISIS militants in Iraq to stop the organization’s advance. Yet, the operations are insufficient to abolish the threat. Meanwhile the Yazidi community is still under threat

A senior Pentagon official said on Monday that the U.S. air strikes on Islamic State of Iraq and al-Sham positions in northern Iraq have slowed down the militants' operational pace and temporarily disrupted their advances towards Irbil.

The U.S. jets continued the aerial bombardment of ISIS militants on Monday, targeting vehicles and checkpoints belonging to the group in northern Iraq, since President Barack Obama's authorization for airstrikes on Thursday.

"(The Secretary-General) encourages Prime Minister-designate al-Abadi to form a broad-based government acceptable for all components of Iraqi society, in accordance with the constitutional time-frame," said a statement issued from his press office.

The bypassing of the incumbent Prime Minister Nouri al-Maliki, who sought a third-term as prime minister, came as tensions rose and the security forces supporting him stepped up their presence around key sites in Baghdad on Sunday evening.

U.S. Secretary of Defense Chuck Hagel, who was in Sydney for an annual meeting with Australian defense and diplomatic leaders, attributed the replacement of Maliki by a new prime minister to his ill-governance of the country.

Hagel said the embattled prime minister must shoulder the responsibility for failing his country in many ways.

"It is as unpredictable, dangerous and complicated as it's ever been. This is why a military solution is not going to end it or fix it," he said,
describing ISIS as a "threat to the civilized world."

Late Monday, the U.S. also delivered its fifth batch of humanitarian aid to Iraqi Yazidis who have been besieged by Islamic State militants atop Mount Sinjar in northeastern Iraq for the last week.

In total, 76 bundles were dropped by C-17 and three C-130 cargo aircrafts overnight, according to Central Command, the Pentagon's Middle East command.

On Saturday, President Obama warned it was "going to take some time" to help stabilize Iraq in the face of the militant insurgency.