US Secretary of State encourages new inclusive gov't in Iraq 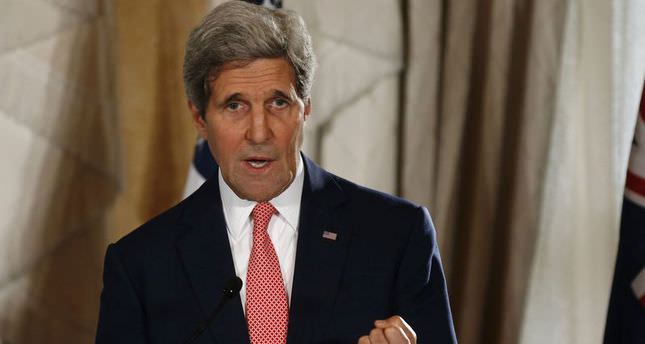 by Aug 12, 2014 12:00 am
US Secretary of State John Kerry on Tuesday urged Iraqi prime minister-designate Haidar al-Abadi quickly to form an inclusive government, while ruling out sending US combat troops to the country.

"We are urging him to form a new cabinet as swiftly as possible and the US stands ready to support a new and inclusive Iraqi government and particularly its fight against ISIS," he said after annual security talks in Australia.

"Let me be very clear, we have always wanted an inclusive government that represents ... all Iraqis. That is the goal."

He added that it was important "the forces of Iraq are not a personal force defined by one particular sect and sworn to allegiance to one particular leader, but they truly represent Iraq and Iraq's future in a broad-based sense".

"And I think that everybody understands that is the direction we have to go," he said.

"Nobody, I think, is looking towards a return to the road that we've travelled.

"What we are really looking for here is a way to support Iraq, to support their forces -- either training or equipment or assistance of one kind or another -- that can help them to stand on their own two feet and defend their nation."

Iraq moved closer to ending Nuri al-Maliki's stubborn grip on power as prime minister on Monday when his own political clan spurned him for Abadi.

Abadi, a Kurd long considered a close Maliki ally, has 30 days to form a government, amid hopes that a broad-based cabinet could serve as a foundation for healing Iraq's deep sectarian divides.

While the US has been conducting air strikes against the Islamic State of Iraq and Al-Sham (ISIS) militants in northern Iraq, Kerry said combat troops would not be sent in.

"There will be no reintroduction of American combat forces into Iraq. This is a fight that Iraqis need to join on behalf of Iraq," he said.

But the United States is helping ship weapons to the Iraqi Kurdish forces battling an advance by the jihadists, the State Department said. The Islamic State was previously known as ISIS.

US aircraft have also been airdropping aid to refugees from the Yazidi religious minority who are trapped on a mountain in northern Iraq, surrounded by extremists from ISIS.

"As you know, it was the Iraqi government that requested the US assistance with humanitarian delivery," he said in Sydney.
"We agreed with that request. We are carrying out those missions.

"It was also the Iraqi government's request of the United States to assist them with transporting military equipment to Arbil to help the Peshmerga (Kurdish fighters)."

He added that the military equipment being shipped was Iraqi.

"We are -- American forces, through CENTCOM -- are helping get that equipment to Irbil."