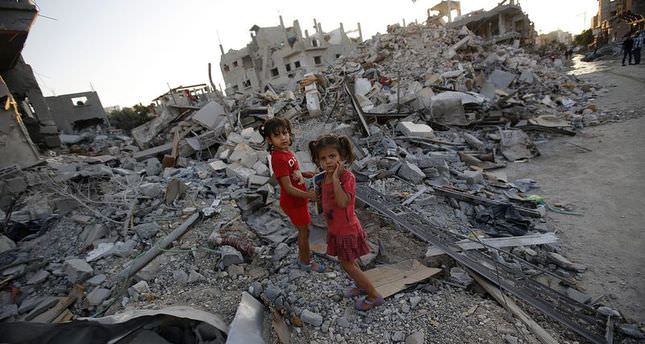 by Aug 13, 2014 12:00 am
Indirect negotiations between Palestinians and Israelis for a truce in Gaza resumed on Wednesday, a Palestinian official said, as the clock ticked towards the midnight expiry of a three-day halt to hostilities.

The talks, held at the General Intelligence headquarters in Cairo, are expected to last all day as Egyptian mediators race to bridge the gaps between the two sides.

The negotiations "are in a very sensitive stage and we hope to reach an agreement" before midnight (2100 GMT), said Palestinian delegation head Azzam al-Ahmed.

Nearly 2,000 Palestinians have been killed since Israel launched its Gaza offensive on July 8 to halt cross-border rocket fire. On the Israeli side, 67 people have been killed, mostly soldiers.

Egypt brokered the 72-hour truce which took effect at 00:01 on Monday (2101 GMT Sunday), and has urged the warring sides to make every effort to reach "a comprehensive and permanent ceasefire".

The Palestinians, included representatives of Gaza's de facto rulers Hamas, are demanding an end to the eight-year blockade of Gaza.

Palestinian officials said Israel had so far proposed easing restrictions at two of the six border crossings it shares with the small coastal enclave.

The Palestinians, for their part, have rejected an Israeli demand for Hamas to disarm.

Hamas's negotiating position has been strengthened by support from the moderate Palestinian president Mahmud Abbas, whose aide Azzam al-Ahmed is heading the delegation.

"The Israeli delegation negotiates with us as a Palestinian delegation, but the (Hamas-PA) division is uppermost in their minds," Ahmed said.

"We will defend the Palestinian people's rights as a priority," he added.