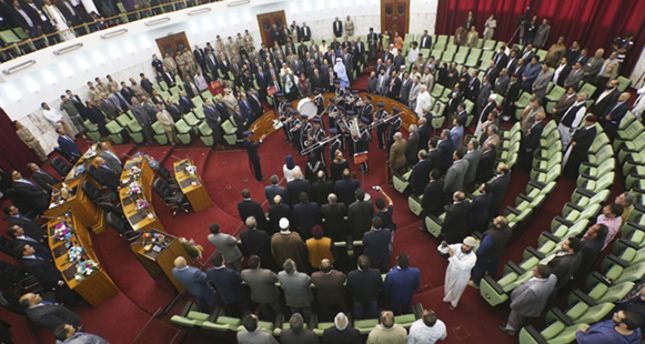 by Associated Press Aug 13, 2014 12:00 am
Libya's newly elected parliament asked the United Nations for an "international intervention" Wednesday as militia violence raged across the country.

Libya is undergoing its worst spasm of violence since the 2011 ouster and killing of dictator Moammar Gadhafi. Thousands have fled the country, including diplomats and foreign nationals. Scores of embassies have closed down and international organizations have shut their offices.

Lawmakers convened in Libya's eastern-most city of Tobruk, far from weeks long militia battle over the international airport in the capital, Tripoli, and clashes in the country's second-largest city, Benghazi.

They adopted a resolution asking the Security Council for help. It passed with 111 votes in favor from among 124 lawmakers present.

It was not immediately clear how the U.N. would respond to the Libyan parliament plea but calls for outside help have come from many in Libya. The U.N. mission in Libya which evacuated because of the violence has called on warring parties to stop the violence and hold peace talks.

Violence mounted when militias mainly from the coastal city of Misrata launched an attack on the Tripoli airport, under the control of rival militias from the mountain town of Zintan. Analysts believe that the operation came as a backlash to militants' devastating loss in last parliamentarian elections and to counter a campaign in Benghazi led by a reneged army general and army units against militias.

Militias are the only force on the ground in Libya as the 2011 war left its police and military shattered. Successive transitional governments have relied on militias to maintain order.

The new parliament composed of mostly anti-religious politicians is discussing another resolution to order disbandment of the militias, though similar attempts have failed in the past.