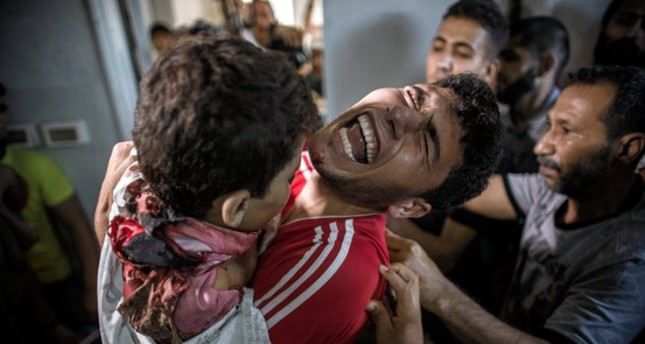 by Daily Sabah Aug 13, 2014 12:00 am
On the second day of Cairo talks, negotiations between Israeli and Palestinian representatives have continued without having made any significant progress to reach a long-term cease-fire agreement that would bring a definitive end to the four-week-long Gaza war. After both sides engaged in indirect talks mediated by Egypt for nearly 10 hours on Monday, there was still no agreement reached on Tuesday, according to an Israeli official told AFP news agency saying that "The gaps are still very wide. There has not been progress in the negotiations." Israeli Prime Minister Benjamin Netanyahu's security cabinet meeting was also cancelled.

As the peace talks continue on volatile ground, the current negotiations are expected to tackle core issues like the eightyear- old Israeli blockade of the territory, a sensitive subject that is likely to be what has stalled the ongoing negotiations. Since the Egyptian-mediated talks launched, Israel has rejected the Palestinian delegation's demands including the cessation of military operations in the Gaza Strip and the lifting of the siege while demanding a full demilitarization of Gaza.

During the current talks, Israel has agreed to ease conditions in the Gaza Strip, a senior official in Jerusalem told Haaretz, an Israeli daily newspaper. According to reports, some concessions were offered by the Israeli delegation including "extending fishing zones in the waters off Gaza; narrowing a no-go security zone along the border; and allowing some 170 Palestinians a day to pass into Israeli territory through the Erez crossing for travel to the West Bank or Jordan." The transfer of money to some 40,000 civil servants hired by Hamas in Gaza would be also allowed by Israel with the condition of international supervision of money transfer.

Apart from these concessions, Hamas' demand for a seaport and airport in Gaza has been rejected. The attempts to resume peace talks over the past decade have led to no further progress on ending the ongoing conflict. The negotiations between Israeli and Palestinian officials for a solution to the decades-long conflict based on territorial compromise have broken down due to mutual accusations of violations for implementing key aspects of the agreements. The Oslo Accords agreement was the first failed peace agreement signed in 1993.

In an effort to investigate Israel's deathly assault on the Gaza Strip, which killed more than 2,000 Palestinians civilians, the U.N. Human Rights Council (UNHRC) has named experts to begin an independent commission of inquiry into violations of human rights and international law in the Gaza Strip and East Jerusalem in line with the Israeli military's latest operations in Gaza. Israel responded to the war crimes investigation, dismissing the U.N. inquiry. The independent commission is expected to report Israel's war crimes, human rights violation to the 28th session of U.N. human rights Council.

Since the Israeli military campaign launched, more than 2,000 Palestinians civilians have been killed during the Israeli raid. At least 425,000 displaced people in the Gaza Strip are in emergency shelters, according to the U.N. Nearly 12,000 homes have been destroyed or partially damaged by Israeli air strikes.
Last Update: Aug 13, 2014 11:43 am
RELATED TOPICS