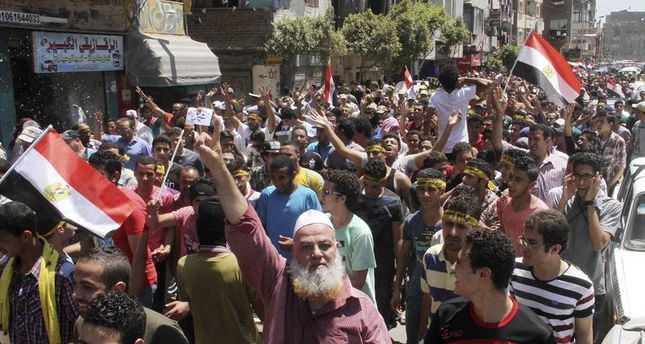 by AA Aug 14, 2014 12:00 am
At least seven Egyptians were killed on Thursday when security forces dispersed rallies marking the passage of one year since the bloody dispersal of two major sit-ins by supporters of ousted president Mohamed Morsi in Cairo and Giza, according to sources from Morsi's main support bloc.

A Health Ministry official, however, said that only four deaths were confirmed, including that of a policeman.

According to sources from the pro -Morsi National Alliance for the Defense of Legitimacy, seven people were killed when security troops forcibly broke up protests that marked the first anniversary of the killing of hundreds ofMorsi backers in Cairo's Rabaa al-Adawiya Square and Giza's Nahda Square.

Ahmed Abdel-Wahab, 18, was killed when security forces dispersed a protest in the Sixth of October City, a source from the bloc said.

Khairi al-Shawadfi, from the Nile Delta province of Sharqiya, died after being shot in the stomach with birdshot as security forces dispersed a pro-Morsi rally in Giza's Mohandiseen district, another source from the pro-Morsi bloc told AA.

Islam Gamal, 26, was also killed by police gunfire during the dispersal of a similar protest in southern Cairo's Maadi district, the source said.

Three others were also killed after being shot when security forces broke up a pro-Morsi protest in eastern Cairo's Matariya neighborhood, according to another alliance source.

The three slain demonstrators have been identified as Omar Ramadan, 24; Eman Mohamed, 18; and Ahmed Labib, whose age is unknown, the source said.

A sixth fatality was also reported in Mohandiseen, but his or her identity remains unknown, an alliance source said.

Interior Ministry officials were unavailable for comment on the bloc's assertion, but police usually deny using live ammunition against demonstrators.

Khaled al-Khatib, head of emergency services at the Health Ministry, told AA that that the ministry had only reports confirming the killing of four people, including a policeman. Seventeen others were also injured, he said.

The Egyptian Interior Ministry earlier said a policeman was killed and another wounded in "clashes" with supporters of Morsi's Muslim Brotherhood.

Demonstrators staged several rallies on Thursday to mark the passage of one year since hundreds of pro -Morsi protesters were gunned down by security forces during the dispersal of twin sit-ins inRabaa al-Adawiya Square and Nahda Square.

In eastern Cairo's Nasr City district, near the now-iconic Rabaa Square, protesters on Thursday marched in red-stained shrouds to symbolize the killings one year ago.

"The people demand the fall of the regime," they shouted.

Some carried posters of Morsi, who is currently in prison pending multiple trials on charges his supporters insist are fabricated.

Protesters staged additional demonstrations in several other cities across the country to demand the prosecution of officials who ordered last summer's bloody sit-in dispersals.

At least 114 Muslim Brotherhood members were arrested on Thursday for allegedly committing "acts of rioting and violence," the Interior Ministry said.

Thursday's protests came in response to calls by the National Alliance for an "uprising" against Egypt's military-backed government.

The protests come amid stepped-up deployments by Egyptian security forces on main streets and around vital facilities.

Morsi, a Muslim Brotherhood leader who won Egypt's first free presidential election in 2012, was ousted by the military in July of last year following protests against his single year in office.

Former army chief Abdel-Fattah al-Sisi, widely seen as the architect of Morsi's ouster and subsequent imprisonment last summer, was declared winner of a presidential poll conducted in May.