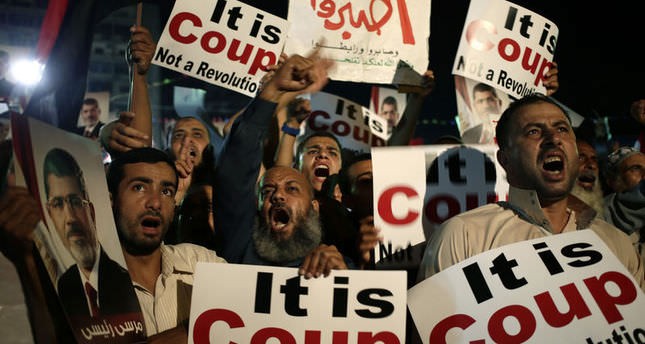 The protests came in response to an earlier call by the National Alliance for the Defense of Legitimacy, Morsi's main support bloc, for an "uprising" against the military-backed government on the first anniversary of the killing of hundreds of Morsi supporters in an hours-long dispersal operation by Egyptian security forces.

In eastern Cairo's Nasr City district, close to the now-iconic Rabaa Square, protesters marched in red-stained shrouds to symbolize the killings and shouted "the people want to bring down the regime" with some carrying posters of Morsi, who is currently imprisoned pending multiple trials.

Protesters also staged demonstrations in several other cities around Egypt, demanding accountability for officials who ordered the dispersal.

The protests come as Egyptian security forces tightened up security measures around main streets and vital establishments since the early hours of Thursday in anticipation of pro-Morsi rallies.

Morsi, a Muslim Brotherhood leader who won Egypt's first free presidential election in 2012, was removed from office by the military last year following protests against his single year in power.