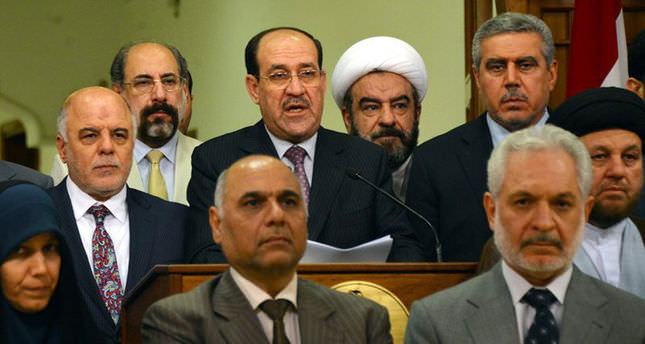 by AA Aug 15, 2014 12:00 am
Iraqi Prime Minister Nouri al-Maliki has announced late Thursday that he gave up on his desire to re-run for the post to pave way for the formation of a new government.

"For the sake of Iraqi people's interests and welfare, I am handing over the seat to my esteemed brother Haider al-Abadi and I will serve as a soldier under his rule," he said.

Maliki was speaking at a press conference with deputies from the State of Law Coalition he led to officially declare that he is stepping aside for al-Abadi after accepting defeat against the new PM-designate who was appointed by President Fouad Massoum to establish a government.

It is a surprising change of discourse for the once defiant PM as just two days ago he attacked al-Abadi's appointment as "not less dangerous than the fall of Mosul."

He also stated that he was leaving the post to enable resumption political process in the fragile country.

Iraq has long been suffering from an ever-escalating ethnic violence, which morped into a militant terror ever since a coalition of armed groups linked to the Islamic State, formerly known as the Islamic State of Iraq and Sham, or ISIS, took control of large swathes of the country's predominantly Sunni provinces in early June.

"I would rather be a soldier so as to clear the way for my brothers who aim for stability, development and progress in Iraq. I am abdicating my right in hope of formation of a new government that will fight against terrorism, save the homeland from splitting and averting the ethnic war," he added.

Maliki also called upon the Iraqi army forces, including the police, armed volunteers and tribes, for restraint and wanted them to remain in their posts despite his stepping down, and continue to fight against 'terrorism.'

"Stay away from any political competition and quarrels. Your main duty is to eradicate terror by defending the land and integrity of Iraq," he said.

The defeated prime minister argued that a new period of terror has begun together with the onset of the Syrian civil war.

He further claimed that international intelligence services embarked on a new move to change the map of the overall region, an arrangement which he says also includes Iraq.

The outgoing prime minister also asserted that he was personally targeted as he spoke to rebuff the accusations brought against him for his failure to set the country free from the recent militant threat.

"I always acted in line with the legal process and endeavored to enforce the constitution. I acted on behalf of the interests of the people of Iraq by ensuring that legal mechanisms function," he said.

Maliki also argued that he only defended his rights and democracy and brought the case to Iraqi Federal Court.

He presented a lawsuit against the president for not observing a deadline to select a new prime minister, which his spokesman Ali al-Moussawi announced he had withdrew earlier Thursday.

On Monday, President Massoum asked al-Abadi, deputy parliamentary chairman, to form a government, snubbing Maliki, who had wanted a third term as prime minister. After forces loyal to Maliki were seen around official buildings Sunday night there were fears his supporters would resist the new government.

The United States, Turkey and Iran, as well as Iraqi Kurdish, Sunni, Shiite groups have welcomed al-Abadi's nomination. He must form a unity government within a month.

Maliki had served as prime minister since 2006 but he lost support by refusing to commit to an inclusive unity government. His pro-Shiite policies are blamed for leading to Iraq's current crisis.
Last Update: Aug 15, 2014 12:31 pm
RELATED TOPICS