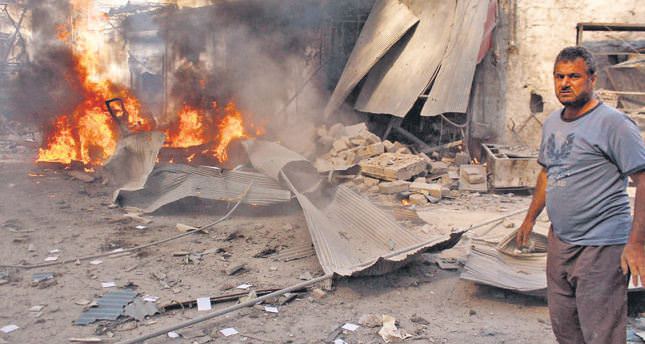 ISIS, which has massacred the Yazidi community in Iraq, has killed members of other opposition groups in Syria, who were mainly members of the moderate Free Syrian Army

Syrian opposition activists say extremist militants from the Islamic State of Iraq and al-Sham (ISIS) have seized key towns and villages near the border with Turkey after deadly clashes with other rebels in the area. They said fighters of the group captured the towns of Akhtarin and Turkmanbareh in the Aleppo countryside Wednesday, dislodging other rebels fighting to topple President Bashar Assad. They also took three nearby areas. The two towns have a large Turkmen population. It was reported that the Turkmens have been fleeing to the Turkish border as ISIS militants began committing atrocities in the towns. They are believed to have killed dozens of Syrian rebels.

Activists said at least 50 opponents were slaughtered and added that what ISIS does in Syria is just undermining the "revolution." Members of the Free Syrian Army and the Islamic Front also claimed that the al-Nusra Front which is the official branch of al-Qaeda in Syria, started fighting ISIS, betrayed their fighters and then allied with ISIS.

Anadolu Agency (AA) reported that fierce clashes erupted after ISIS militants seized control of the opposition-held town and nearby Turkmen villages of Barih, Aziziyah, and Khoz earlier in the day.

Yaser Ahmed, the media officer for the pro-opposition Local Coordination Committees of Syria told AA, "The people in fear of ISIS militants are escaping toward safer regions. Hundreds of families have arrived in Azez." Beha Abu Jamal, a local activist in Aleppo, earlier told AA that ISIS militants have tightened their grip in the north of Aleppo and around Hasakah on Wednesday, attacking the regime-held Tabkha military airport in Raqqa city with heavy weapons.

While ISIS was attacking towns in the north, the Syrian regime also shelled barrel bombs on the opposition-controlled Bab Neirab and Shaar areas of Aleppo, according to the Syrian Revolution General Commission. The attack left at least 17 dead.

Meanwhile, ISIS continues to pose a danger to the Yazidis, an ethno-religious minority in Iraq. Thousands of Yazidis are trapped near the Sinjar Mountain and struggle with thirst and hunger. The death toll of Yazidis is not clear as no reports have come from the region. Yet, it is estimated that more than 500 were killed. The U.S. said it is unlikely to rescue the trapped Yazidis as no soldier can be sent to the area due to security concerns. However, an international plan is under way to rescue civilians trapped by Islamic State fighters on a mountain in northern Iraq, British Prime Minister David Cameron said Wednesday.

Cameron declined to give details of the operation but said Britain would play a role, just as it had worked alongside the U.S. in conducting humanitarian aid drops to thousands of Yazidis and other minorities who have fled to the Sinjar Mountain.

The U.N. has announced its highest level of emergency for the humanitarian crisis in Iraq in the wake of the onslaught by Islamic militants who have
overrun much of the country's north and west and driven out hundreds of thousands from their homes.

The Security Council also said Wednesday it was backing a newly nominated premierdesignate in the hope that he can swiftly form an 'inclusive government' that could counter the insurgent threat, which has plunged Iraq into its worst crisis since the U.S. troop withdrawal in 2011. The crisis in Baghdad also deepened after Haider al-Abadi was appointed as prime minister despite the former one, Nouri al-Maliki, refusing to leave his post. While the administrative crisis divides Baghdad, clashes erupted between Iraqi troops and ISIS militants in the west of Baghdad which left more than five dead, four of which were children.
Last Update: Aug 15, 2014 1:56 am
RELATED TOPICS