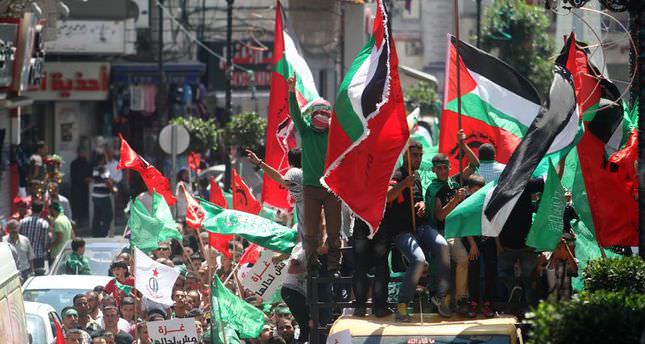 by AA Aug 15, 2014 12:00 am
At least 40 Palestinians were injured in clashes that erupted across the West Bank as Israeli troops scrambled to disperse rallies held in solidarity with the embattled Gaza Strip, eyewitnesses said Friday.

A journalist was also arrested by Israeli troops while covering the violence, they added.

Five other Palestinians were injured when Israeli forces broke up a pro-Gaza march in Bethlehem, eyewitnesses added.

Other parts of the occupied territory also saw massive protests in support of Gaza, called for by Palestinian faction Hamas.

Since July 7, Israel has pounded the Gaza Strip from land, sea and air, killing at least 1962 Palestinians and injuring some 10,000 others. Thousands of homes throughout the beleaguered territory have also been destroyed in the offensive.

Over the same period, at least 64 Israeli soldiers have also been killed in battles with Palestinian fighters in the Gaza Strip while three Israeli civilians have been killed by Palestinian rocket fire, according to Israeli figures.

A fresh five-day ceasefire between Palestinian factions and Israel went into effect on Thursday as part of efforts aimed at reaching a permanent truce deal.

Palestinian factions, however, have linked any permanent ceasefire agreement to tangible concessions by Israel, including the lifting of a years-long blockade on the Gaza Strip and the establishment of a Gaza seaport, among other longstanding demands.

The coastal strip, home to some 1.8 million Palestinians, has reeled under a crippling Israeli blockade since 2006, which has badly affected residents' livelihoods.