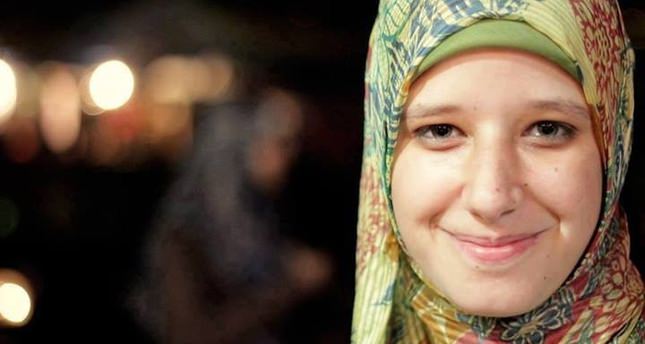 by AA Aug 15, 2014 12:00 am
She stands in front of a nameless grave, tearfully praying for her slain daughter, Asmaa al-Beltagi, who was shot dead one year ago when Egyptian security forces violently dispersed a major sit-in at Cairo's now-iconic Rabaa al-Adiwiya Square.

"This is what I do when missing her becomes too hard to bear," Sanaa Abdel-Gawad, wife of jailed Muslim Brotherhood leader Mohamed al-Beltagi, said of Asmaa. "I pray she forgives me for failing to bring her justice after an entire year."

Abdel-Gawad recalled the day Asmaa was buried, which was not until two days after her death in Rabaa Square on August 14 of last year.

"[Egypt's army-backed authorities] apparently thought it would be too generous to let us write her name on her grave," Abdel-Gawad said. "They removed her small gravestone within hours of the burial."

"Even when her friends later sprayed her name on the grave itself, they [the authorities] painted over it," the grieving mother said.

Asmaa al-Beltagi was shot dead in Cairo's Rabaa al-Adawiya Square, which for six weeks had hosted one of two major protest camps in support of president Mohamed Morsi-ousted by the army last July-before being violently cleared by Egyptian security forces in a daylong onslaught that left hundreds of pro-Morsi protesters dead and over a thousand injured.

Moments before Asmaa drew her last breath, Abdel-Gawad found her in a makeshift field hospital riddled with bullets as security forces pushed further into the square.

"The army murdered my daughter; they took my pride and joy," she said.


Abdel-Gawad said she had been "threatened with a trumped up lawsuit" after authorities detained her husband and prosecuted two of her sons in the wake of Morsi's ouster, when the military-backed government launched a crippling crackdown-which remains ongoing-on Morsi's supporters.

"[The government] wants to silence me, but I won't bow to their threats," she asserted.

Al-Beltagi, arrested in the wake of Morsi's removal from office, is currently on trial with other Brotherhood leaders-including Morsi himself-on violence-related charges his supporters insist are fabricated.

Abdel-Gawad said her husband, while being interrogated, had repeatedly asked for an investigation into Asmaa's murder. But his requests, she said, had "been ignored."

She added that testimony she gave in April before a fact-finding committee drawn up by army-installed interim president Adly Mansour had yielded "nothing."

"There is a politically-driven intent to deny that Asmaa was murdered," Abdel-Gawad asserted.

Since her death, Asmaa al-Beltagi has become an icon for Morsi supporters and other Egyptian protest groups. Over the past year, banners bearing her image have often appeared in anti-government demonstrations.

Abdel-Gawad, who says her daughter's death has only made her stronger, vowed to continue working towards justice and retribution.

"I won't give up until a fair trial sends those responsible for the Rabaa massacre and all other [protesters' deaths] since the 2011 revolution to the hangman's noose," she said.

"The [pro-army] media machine is still trying to sow divisions between the Egyptian people, but many have started to wake up," she added.

The Egyptian government, for its part, attempted to justify the Rabaa Square dispersal by saying that pro-Morsi protesters had assaulted opponents and disrupted the lives of neighborhood residents.