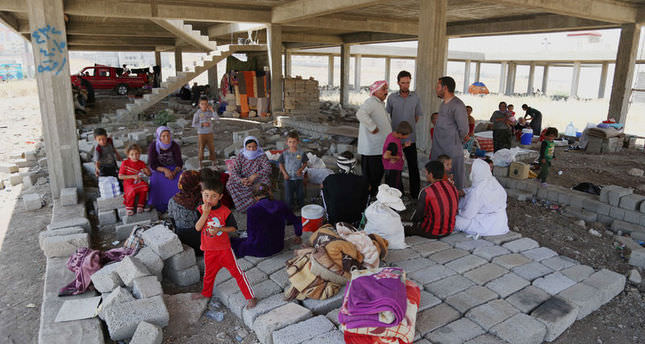 by AA Aug 15, 2014 12:00 am
The UN has designated the humanitarian crisis in Iraq a "level 3 emergency", in order to to mobilize additional resources to help the tens of thousands of people forcefully displaced by the self-proclaimed Islamic State of Iraq and al-Sham (ISIS).

The move was welcomed by aid workers in the field. Kieren Dwyer who works for OCHA (UN Office for the Coordination of Humanitarian Affairs) in Iraq said this level of emergency will allow humanitarian workers in Iraq to "to save lives right now."

Making decisions about "rapidly mobilizing staffing and resources" to help the 1.2 million people displaced in Iraq since January, be made easier now said Dwyer.

UN said to be particularly concerned about the situation on Sinjar Mountain, with people trapped there and the deteriorating health conditions. Some 12,000 displaced Christians sheltering in the Kurdish capital, Erbil, according to the United Nations-are also in a very difficult situation.

Targetted air strikes by U.S. forces have been continuing for the last week to repel ISIS forces in the northern Iraqi city of Irbil and to try to break the siege in Mount Sinjar, where thousands of Yazidi civilians have sought refuge from ISIS militants.

Since last week -- the Iraqi town of Zakho near the Turkish border is hosting some 100,000 displaced Iraqis, mainly from Sinjar and Zumar, according to the United Nations.

The more effective response to the humanitarian needs of Iraqis was announced Thursday by Special Representative of the UN Secretary-General for Iraq, Nickolay Mladenov.

The only other three countries in the world that share emergency status are; Central African Republic, South Sudan, and Syria.