Iraqi MP: Yazidis will not return for fear of genocide 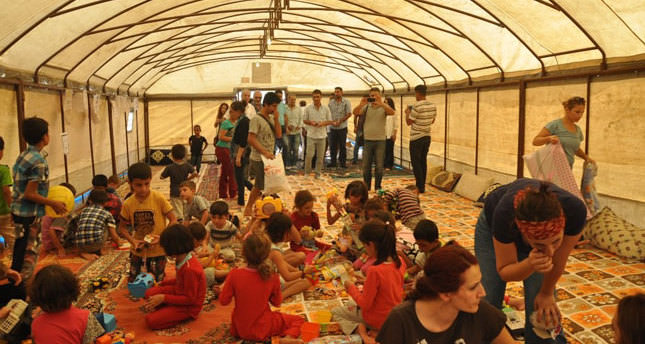 by AA Aug 16, 2014 12:00 am
The Iraqi parliamentarian who brought the plight of fellow Yazidis to the world's attention, Vian Dakhil, said her people are too scared to return to their homes for fear of genocide at the hands of ISIS. Dakhil, who is in Istanbul recuperating from her injuries sustained in a helicopter accident, said Yazidis, thousands of whom are being helped by Turkey, were betrayed by their neighbors.

Iraq's Yazidis are too scared to ever return home because of fears of a future genocide, the Iraqi Yazidi MP, who brought their plight to the world's attention, told Anadolu Agency (AA).

Vian Dakhil, who is recovering in a hospital in Istanbul after surviving a helicopter crash on Tuesday in Northern Iraq said, "They cannot go back to Sinjar. They are too scared to go back," adding, "They don't have the trust anymore to live there because another genocide may occur in the future." "The people around them were the ones who betrayed them during the ISIS [Islamic State of Iraq and al-Sham] assault. They cannot trust them again," she said about ISIS, who took control of large swathes of the country's predominantly Sunni provinces in early June.

Dakhil, Iraq's only Yazidi lawmaker raised the suffering of her fellow Yazidis, who follow beliefs linked to Zoroastrianism and Sufism, in an emotional speech to Iraq's parliament on Aug. 5.

In the face of a barbaric onslaught by ISIS fighters, thousands of Yazidis fled their homes and sought shelter in the Sinjar Mountains. According to Iraq's human rights minister, Mohammed Shia al-Sudani, ISIS killed hundreds of Yazidis and buried some alive, including women and children.

As well as those massacred by ISIS, many died of thirst and starvation before a rescue operation was launched by the U.S. Dakhil was accompanying an aid mission when the helicopter crashed as it attempted to take off, leaving the pilot dead and injuring around 20 people, mostly Yazidis who had just been picked up.

Speaking exclusively to AA, Dakhil said Yazidis faced two choices: live in a U.N.-appointed "safe haven" or emigrate abroad. "Most of them want to go to other countries," she explained.

The Yazidis, who are ethnic Kurds, are primarily heading for safety in the semi-autonomous Kurdish region. Dakhil said many would take up arms with the Kurdish armed peshmerga forces to fight against ISIS.

ISIS militants' offensive was only blocked thanks to U.S. air strikes, which paved the way for a rescue corridor. The peshmerga are still fighting to halt an ISIS advance on their capital, Irbil.

Yazidis are not the only minority group suffering from ISIS atrocities - any group failing to comply with their extreme views faces being targeted. But Dakhil's father, a former official of the Kurdish Regional Government, said the insurgents are particularly brutal toward Yazidis, who they considered devil worshippers because of their beliefs.

Saeed Khuder Dakhil, who claimed more than 1,000 women and children have been "enslaved" by the militants, said, "Shiite, Christian and Shabak people are going through a similar fate. But Islamic State [ISIS] force them out of their home towns - they don't just kill them or take their women and children like they do against us."
Last Update: Aug 17, 2014 8:51 am
RELATED TOPICS