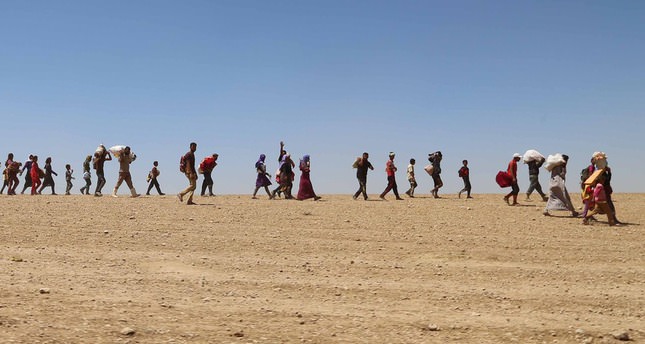 by Daily Sabah Aug 16, 2014 12:00 am
The Islamic State of Iraq and al-Sham (ISIS) continues to pose a danger to the Yazidis, an ethno-religious minority in Iraq. Thousands of Yazidis are trapped near Sinjar Mountain, struggling with thirst and hunger. The death toll of Yazidis is not clear, as no reports have come from the region. Yet, it is estimated that more than 500 people were killed.

The U.S. has conducted several airstrikes on ISIS militants. A senior Pentagon official said on Monday that the U.S. air strikes on ISIS positions in northern Iraq have slowed down the militants' operational pace and temporarily disrupted their advances towards Irbil. U.S. jets continued the aerial bombardment of ISIS militants on Monday, targeting vehicles and checkpoints belonging to the group in northern Iraq, since U.S.

President Barack Obama's authorization for airstrikes last week. Although the attacks have not removed the danger yet, in a televised address on Thursday the President Obama said: "We broke the ISIS siege of Mount Sinjar. We helped vulnerable people reach safety, and we helped save many innocent lives. Because of these efforts, we do not expect there to be an additional operation to evacuate people off the mountain," he said, adding, "There is now no need to evacuate Yazidi civilians or drop further aid." The U.S. has dropped more than 114,000 meals and 35,000 gallons of water, the president said. Obama said most of the troops sent to Iraq to assess the humanitarian crisis would be pulled out "in the coming days."
Last Update: Aug 16, 2014 1:36 am
RELATED TOPICS