Israel's security needs must be met for a deal: PM 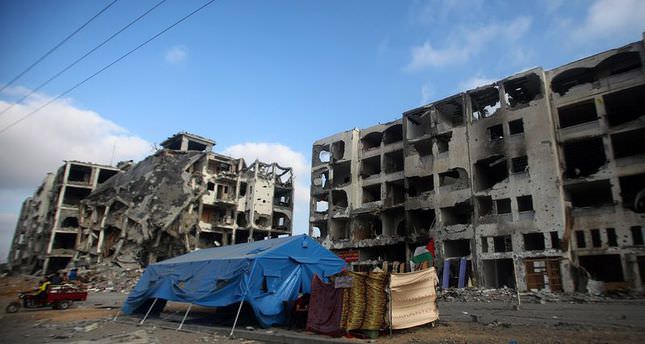 by Aug 17, 2014 12:00 am
Israel will not agree to any long-term ceasefire in Gaza at indirect talks in Cairo unless its security needs are clearly met, Prime Minister Benjamin Netanyahu said on Sunday.

"The Israeli delegation in Cairo is acting with a very clear mandate to stand firmly on Israel's security needs," Netanyahu told ministers at the start of the weekly cabinet meeting in Jerusalem.

"Only if there is a clear answer to Israel's security needs, only then will we agree to reach an understanding," he said, as Israel's negotiating team made its way back to Cairo for indirect talks with the Palestinians over a long-term arrangement to end more than a month of bloodshed in Gaza.

The Egyptian-brokered talks, which were due to resume on Sunday, are taking place during a five-day lull in the fighting between Israeli and Gaza's Hamas de facto rulers which is due to expire at midnight (2100 GMT) on Monday.

In Gaza, Hamas spokesman Sami Abu Zuhri said the Palestinians would not back down from their demands, central of which is a lifting of Israel's eight-year blockade on the enclave, and that the outcome of the talks was in Israel's hands.

"We are committed to achieving the Palestinian demands and there is no way back from this. All these demands are basic human rights that do not need this battle or these negotiations," Abu Zuhri told AFP.

"The ball is in the Israeli occupation's court."

But Netanyahu warned that Hamas, which he said had suffered a major military blow, would not walk away from the Cairo talks with any political success.

"If Hamas thinks it will make up for its military losses with a political achievement, it is wrong," he said.

"If Hamas thinks that by continuing the steady trickle of rocket fire it will force us to make concessions, it is wrong. As long as there is no quiet,
Hamas will continue to suffer heavy blows.

"Hamas knows we have a lot of power but maybe it thinks we don't have enough determination and patience, and even there it is wrong, it is making a big mistake," he said.