Thousands gathered in Tel Aviv for peace in Gaza 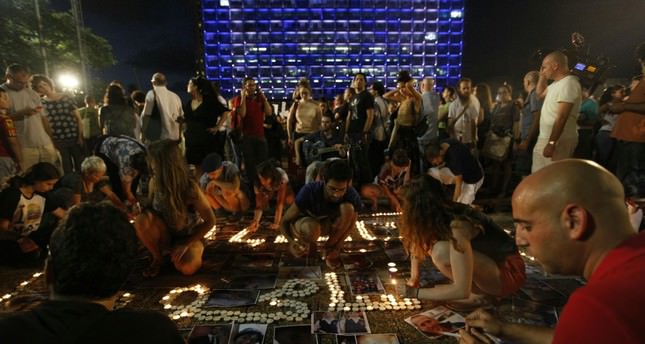 by Daily Sabah Aug 17, 2014 12:00 am
ISTANBUL—Thousands of Israeli demonstators gathered in Tel Aviv's Rabin square on August 16, to call for an end to the Israel's Gaza offensives which has killed almost 2,000 Palestinians, including mostly civilians.
Left-wing organizations in Israel have joined the demonstration, demanded Israeli government to continue peace negotiations with Hamas and lift the blockade on Gaza.
The event's facebook page stated "Only an agreement will ensure long-term security and quiet for residents of the south and of the entire country. There is another way – immediate dialogue with Palestinians to ensure a fair peace, the opening of Gaza and a determined stand of Arabs and Jews against racism and for life. Only a two-state political solution will guarantee independence, justice, security and hope for all people living in this land."
The demonstrators said that there is no military solution for the conflict between Hamas and Israel, and the peope in Israel will not be able to live safely until the siege on Gaza lifted.
The Gaza Strip has been reeling under the Israeli blockade since 2006. The blockade has shattered and ruined the lives of the 1.9 million Palestinians enclaved around coastal.

More than 2000 Palestinians have been killed and more than 9450 others injured in relentless Israeli attacks on the Gaza Strip since July 7.
Last Update: Aug 17, 2014 1:19 am
RELATED TOPICS