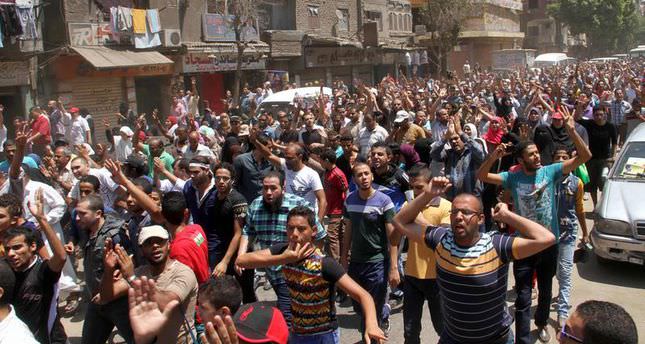 by AA Aug 18, 2014 12:00 am
A senior member of the international organization of the Muslim Brotherhood said that the British government was facing pressure from Egypt and certain Gulf States to label his group a "terrorist organization."

"We expect London not to bow to these pressures," the organization's secretary-general, Ibrahim Munir, told Anadolu Agency.

On Sunday, the Financial Times newspaper reported that London had delayed publication of a report on the Muslim Brotherhood's activities amid disagreements among government ministers and officials over the report's findings.

The newspaper quoted officials familiar with the report as saying that the review had concluded that the group should not be designated a "terrorist" organization.

According to Munir, the delay was the result of "pressures" on London to steer the report in a particular direction.

"Those in Egypt and the Gulf who supported the review [of the Brotherhood] expected to find in it a justification to accuse the Brotherhood of engaging in terrorism, which they failed to do," he said.

The report was requested by Prime Minister David Cameron as an internal government review of the Muslim Brotherhood's "philosophy and activities."

The move came months after elected Egyptian president Mohamed Morsi, a Brotherhood leader, was ousted by the army in the summer of last year following demonstrations against his single year in office-a move Morsi supporters describe as an illegitimate military "coup."

Shortly after Morsi's removal from office, the 85-year-old Islamist movement was labeled a "terrorist group" by both Egypt and Saudi Arabia.

According to London, the review-led by U.K. Ambassador to Saudi Arabia Sir John Jenkins-seeks to "understand" the movement and its impact on British national security and London's interest in maintaining stability in the Middle East region.

The Financial Times said that the U.K. government, fearing negative reactions from its Middle East allies, had decided to delay the report's findings.

"Egypt and the Gulf countries are still exerting pressure to get the report to label us a 'terrorist organization," Munir said.

"But we don't expect Britain to make such a move after its investigations affirmed our innocence," he added.

"Their efforts [i.e., those of Egypt and certain Gulf states] will end in failure because the Brotherhood's history is crystal clear; all the group's activities are open to the whole world," the Brotherhood's Munir asserted.

He added: "At our meetings with British officials, we felt there was no chance that the U.K. planned to add the Brotherhood to its list of terrorist groups."
Last Update: Aug 18, 2014 5:24 pm
RELATED TOPICS