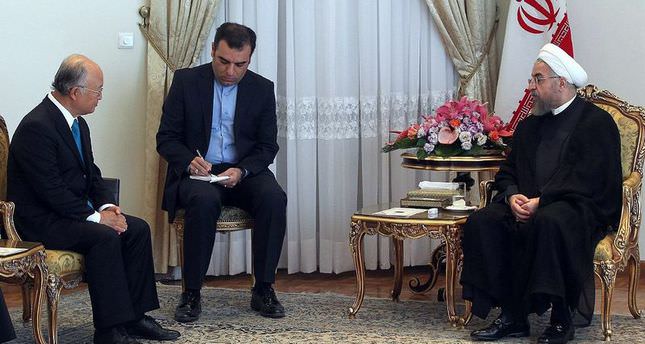 by AA Aug 18, 2014 12:00 am
As part of efforts by the International Atomic Energy Agency (IAEA) to establish that Iran's nuclear program is peaceful and that the country is not pursuing nuclear weapons, the head of the IAEA visited Iran to discuss Iran's previous use of a detonator that has both military and civilian applications.

The subject of exploding bridge wire detonators - which can be used for drilling for oil and gas and for conventional military explosives - was discussed by Ali Akbar Salehi, chairman of the Atomic Energy Organization of Iran and the organisation's director general Yukiya Amano.

"My purpose today was to meet with high-level policy makers, to discuss how to strengthen cooperation and dialogue as agreed under the Framework for Cooperation, as well as in other areas," said IAEA director Amano.

Salehi stated that they had answered all questions of the International Atomic Energy Agency about Iran's nuclear program.

Exploding bridge wire detonators are allegedly used for military purposes. Iran claims that this accusation is groundless and is willing to clear any doubts regarding this issue, Salehi stated.

An agreement, the Framework for Cooperation, was signed on November 11 last year, between the agency and Iran, which meant Iran would provide access and information into its past nuclear activities to alleviate the agency's concerns about the country's nuclear program.