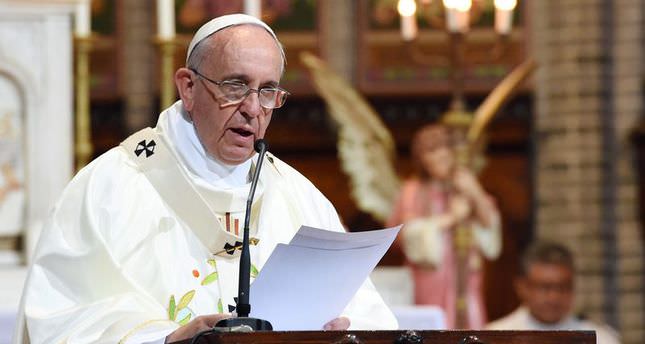 by Aug 18, 2014 12:00 am
Pope Francis said on Monday the international community would be justified in stopping the self-proclimed Islamic State of al Sham (ISIS) militants in Iraq but that it should not be up to a single nation to decide how to act.

"In these cases, where there is an unjust aggression I can only say that it is legitimate to stop the unjust aggressor," he told reporters on the plane returning from South Korea in response to a question about U.S. air strikes against ISIS insurgents who have overrun much of the country's north.

Proclaiming a caliphate straddling parts of Iraq and Syria, the militants have swept across northern Iraq and driven tens of thousands of Christians and members of the Yazidi religious minority from their homes.

The pope suggested he was not giving a automatic green light for bombings or war but that the situation was grave and the international community had to respond together.

"I underscore the verb 'to stop'. I am not saying 'bomb' or 'make war', but 'stop him'. The means by which he can be stopped must be evaluated. Stopping the unjust aggressor is legitimate," he said.

He said the United Nations was the proper forum to consider the issue and to ask: "Is there unjust aggression? It seems so. How do we stop it?"

In response to another question, the pope said he had considered going to Iraq during the crisis but decided against it. "At this moment, it would not be the best thing to do but I am willing to do it," he said.