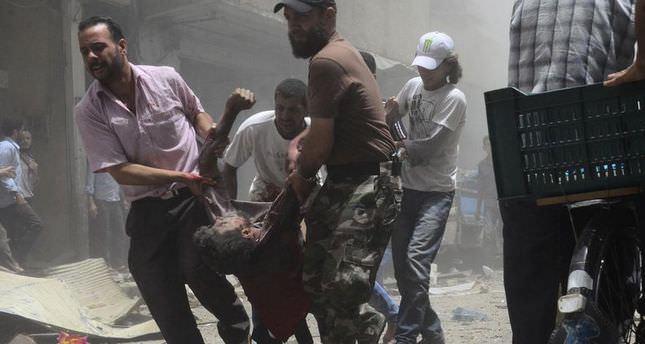 by AA Aug 19, 2014 12:00 am
At least 42 people were killed in air and ground operations across Syria on Monday by forces of President Bashar al-Assad, opposition activists say.

The London-based Syrian Network for Human Rights, which tracks civilian and opposition casualties, said the regime's air and land operations Monday killed 14 in the suburbs of capital Damascus, nine in Aleppo, eight in Daraa, three each in Ar-Raqqah, Hama, and Deir ez-Zor, and one each in Haseke, and Lattakia.

Syria has been gripped by civil war since March, 2011. Last month, the Syrian Network for Human Rights reported that more than 133,000 people had been killed in regime attacks.

Meanwhile, militants affiliated with the self-proclaimed Islamic State of Iraq and Sham (ISIS), destroyed the tomb of Prophet David in Aleppo, according to the Syria General Revolutionary Council.

ISIS has declared a "caliphate" that straddles parts of Syria and Iraq, and has driven an estimated 1.2 million Iraqis from their homes. The insurgents have particularly targeted Shiite Muslims, Turkmen, Yazidis, and Christians.
Last Update: Aug 19, 2014 12:54 pm
RELATED TOPICS