Death toll from Israel's Gaza onslaught up to 2018 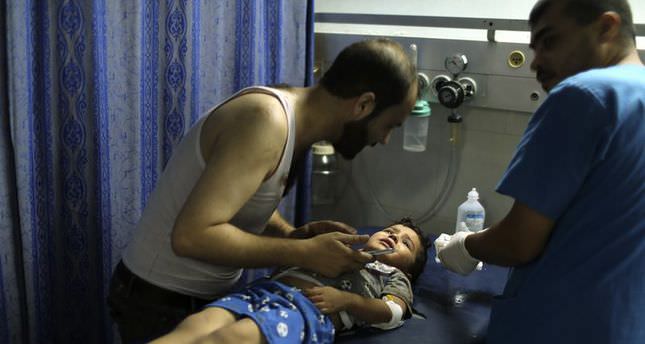 by AA Aug 19, 2014 12:00 am
The Palestinian death toll from a deadly Israeli onslaught on the Gaza Strip has risen to 2018 since July 7, according to the Health Ministry.

A Palestinian child was killed and 25 people were injured in Israeli attacks on the blockaded strip on Tuesday, ministry spokesman Ashraf al-Qodra told Anadolu Agency.

A Palestinian man succumbed to wounds he sustained in an earlier Israeli strike in the southern city of Khan Younis, he said.

The latest fatalities bring to 2018 the number of Palestinians killed in Israeli attacks on the beleaguered seaside enclave since July 7, al-Qodra said.

At least 10,218 Palestinians have also been injured.

Violence flared up in the Palestinian territories on Tuesday following a temporary lull brokered by Egypt as part of efforts to strike a permanent ceasefire deal between Palestinian factions and Israel.

According to Israeli figures, at least 64 Israeli soldiers have been killed in recent ground battles with Palestinian fighters in the Gaza Strip-the highest military death toll for Israel of any of its three onslaughts on the territory.