Gradual lift of Gaza blockade agreed upon by Israel and US: sources 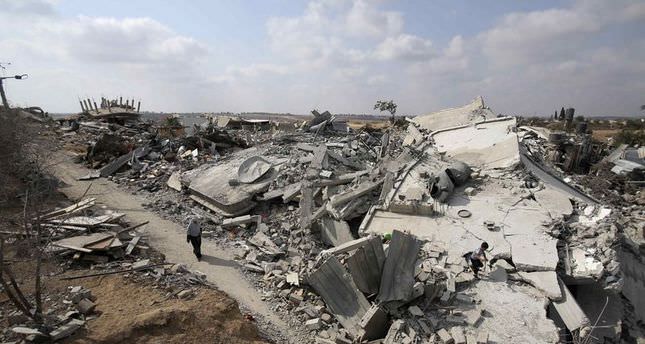 by AA Aug 19, 2014 12:00 am
The Israeli government and U.S. administration have agreed on a gradual end of the years-long blockade on the Gaza Strip as part of efforts to reach a durable ceasefire with Palestinian groups in the coastal enclave, according to an Israeli paper.

Government sources were quoted by Yediot Ahronot as saying that Israel had coordinated with Washington to draw out the details of a long-term ceasefire deal with the Palestinian groups as US Secretary of State John Kerry is expected to arrive in Israel next week.

Kerry's visit would serve as a "show of support" for Israel and Prime Minister Benjamin Netanyahu and in order to demonstrate that the sides are not at odds, the sources said.

According to the Israeli paper, the gradual lifting of Gaza siege would start with the land crossings and lead eventually to allowing sea traffic.

Under the agreement, Israeli will not block the transfer of salaries to Hamas civil workers in Gaza and will allow for the reconstruction of the devastated enclave with the use of international help, Yediot Ahronot said.

Palestinian factions and Israel have been holding indirect talks in Cairo aimed at reaching a permanent ceasefire to end one of Israel's deadliest ever offensives against the Gaza Strip, which left at least 2016 people dead and more than 10,000 others injured.

The recent Israeli offensive on the Palestinian territory had also left thousands of homes and buildings in Gaza in total ruin.

About 64 Israeli troops were also killed in Gaza combat, while three Israeli civilians were killed by rockets fired from the coastal enclave.

The coastal strip, home to some 1.8 million Palestinians, has reeled under a crippling Israeli blockade since 2007, which has badly affected residents' livelihoods

The Palestinian factions have linked any permanent ceasefire agreement to tangible concessions by Israel, including the lifting of the blockade on the Gaza Strip and the establishment of a Gaza seaport, among other longstanding demands.