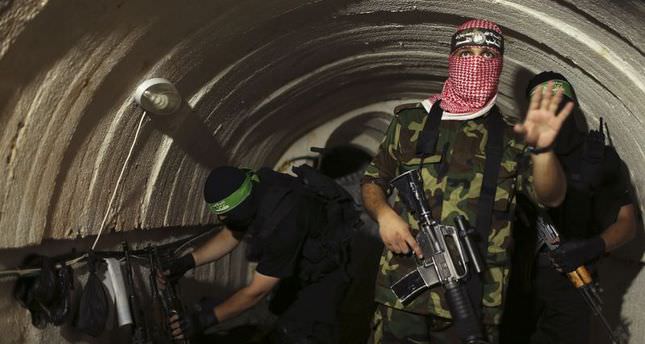 by AA Aug 19, 2014 12:00 am
The Ezzeddin al-Qassam Brigades, the armed wing of Palestinian resistance faction Hamas, claimed to have fired 34 rockets at Israeli cities on Tuesday.

The Brigades said in a statement that the rocket fire targeted several Israeli cities, including Tel Aviv, Beersheba and Ben Gurion airport.

Violence flared up in the Palestinian territories on Tuesday following the collapse of a temporary ceasefire in the Gaza Strip between Palestinian factions and Israel.

Israel launched several airstrikes across the Palestinian territory on Tuesday, leaving a child dead and 25 people injured, according to the Palestinian Health Ministry.

Israeli army said the attacks came in response to rocket fire from the Gaza Strip despite a temporary ceasefire, which is set to expire at Tuesday midnight.

Hamas, for its part, has described the Israeli attacks as an attempt to undermine Egypt-hosted negotiations aimed at reaching a permanent ceasefire.

At least 2018 Palestinians have been killed and more than 10,000 others injured in more than a month of devastating Israeli attacks on the besieged Gaza Strip since July 7.

According to Israeli figures, at least 64 Israeli soldiers have been killed in recent ground battles with Palestinian fighters in the Gaza Strip-the highest military death toll for Israel of any of its three onslaughts on the territory.