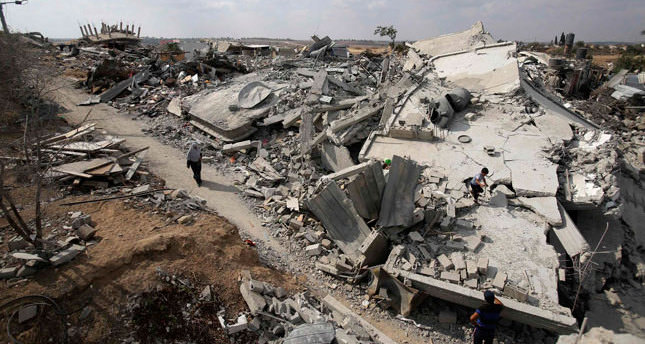 by Daily Sabah Aug 19, 2014 12:00 am
Before the temporary fiveday truce expired on Monday night, Israeli Defense Forces (IDF) destroyed the homes of three Palestinians accused of involvement in the killings of three Israeli teenagers in the southern West Bank in June. According to IDF reports, the homes of Hussam Kawasme and Amar Abu Aysha were demolished while the property of a third Palestinian suspect, Marwan Kawasme, was sealed off. The Israeli military stated that Israel's Supreme Court has also approved the demolition of West Bank homes despite three appeals made by the families of the suspects' rejection of ordered destruction.

According to Israeli authorities, Hussam Kawasme, a 40-year-old resident of the West Bank city of Hebron, had admitted organizing the kidnapping, and was arrested on July 11 in connection with the killing of the Israeli teenagers. He was also accused of "securing funding from Hamas and buying weapons, which he passed on to the two other suspects who carried out the attack."

Meanwhile, negotiations between the Israeli and Palestinian delegations resumed on Monday with no sign of significant progress to reach a long-term cease-fire agreement for a definitive end to the four-week long Gaza war. Any long-term cease-fire agreement in Gaza from the indirect talks in Cairo seems difficult to achieve as the two sides have not agreed to each other's demands yet, and the wide gaps have left no room for reconciliation between the two parties.

The peace talks between Israeli and Palestinian officials for a solution to the decades-long conflict based on territorial compromise have broken down due to mutual accusations of violations for implementing key aspects of the agreements. Before the five-day Gaza truce expired, Israel canceled rail traffic near the Gaza Strip due to potential rocket fire.

Following the discovery of the bodies of three Israeli teenagers in the southern West Bank, tension increased between the Israeli military and Hamas, as Israel holds Hamas responsible for the kidnapping and killing of the three teenagers, Gilad Shaer, Naftali Fraenkel and Eyal Yifrah, who went missing on June 12. Hamas rejected Israel's accusation of being responsible for the killings. Following the mass protests demanding revenge for the murder of Mohammed Abu Khdeir, who was abducted and burned alive, which sparked growing anger, it lead to the launch of Israel's military operation dubbed "Operation Protective Edge." Since the start of the Israeli military campaign, the Palestinian death toll stands above 2,000 as of Monday. According to the Palestinian health ministry, a total of 2,016 unarmed civilians were killed and another 10,196 wounded. On the Israeli side, 64 soldiers were reportedly killed during the offensive.
Last Update: Aug 19, 2014 1:46 am
RELATED TOPICS